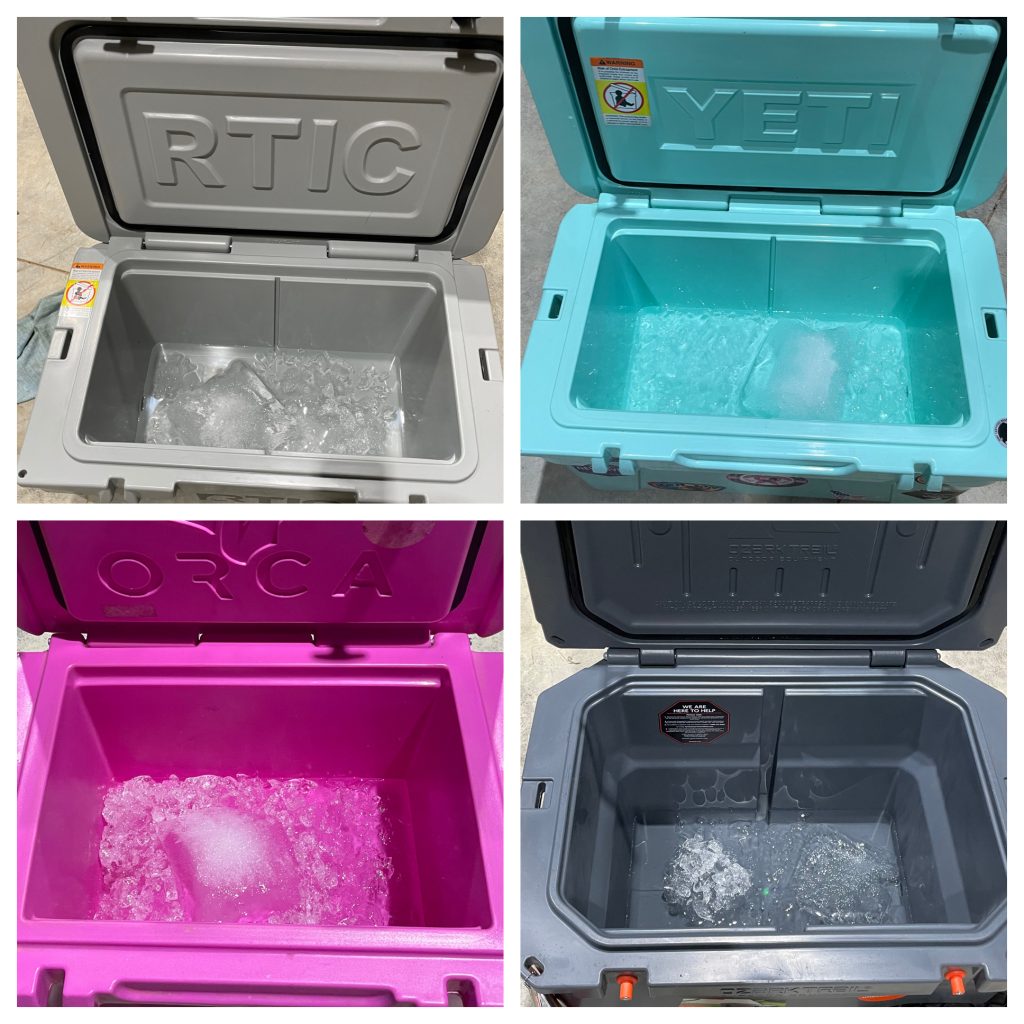 What sparked my interest in doing a gear review on coolers?

After researching coolers online, I found a bunch of “gear reviews” from other bloggers detailing the specifications of every brand of cooler on that they could make money from and a list of their assumptions of which cooler might hold ice the longest based on their online “research”.  Not actual test results!  I need to know if it’s worth the investment before making an extravagant purchase on a high-end cooler.  Let’s face it, with the price of coolers today, some of these coolers are a luxury, not a necessity.  Unfortunately, I didn’t trust the other gear reviews enough to spend my money on one, so, I decided to test them myself and these are the results.

What coolers were included in the test? 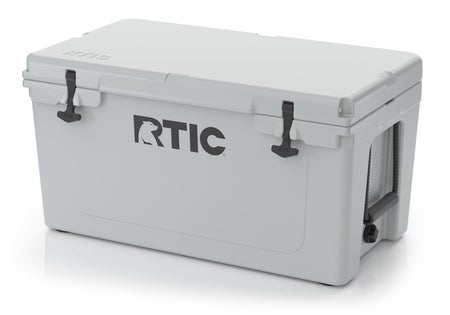 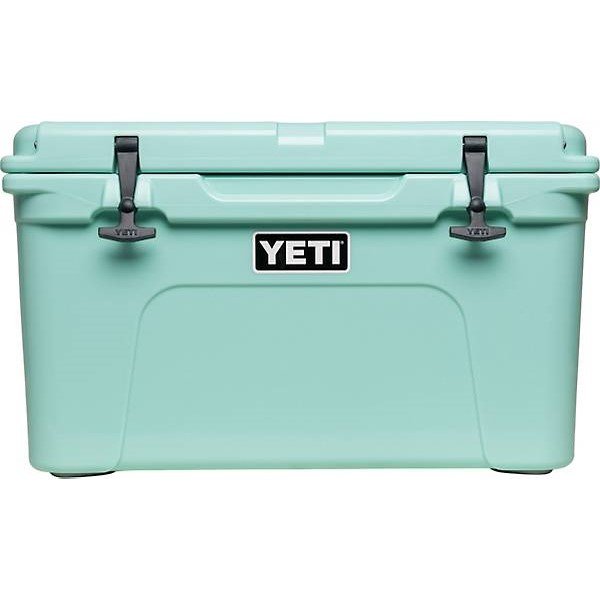 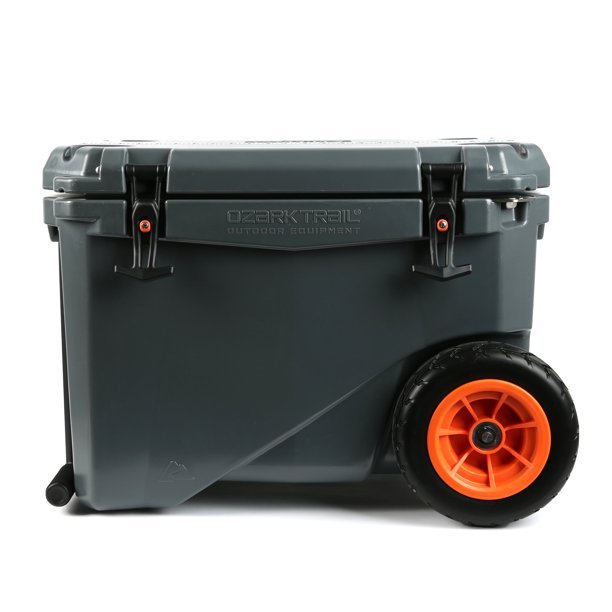 How did I ensure the test was fair?

Ensuring that the coolers are the exact same temperature was easy.  I simply opened them up in my garage, spaced them approximately two feet apart and let them sit there for a week without adding any ice.  A week was a little longer than it needed to be but it was effective nevertheless.  This ensured that each cooler was subjected to the exact same ambient air temperature.

The most difficult part of the test is controlling the quality of ice used for the test.  One thing I’ve noticed in years of filling coolers with ice is that now all ice is created equally.  There are different densities and styles of ice cubes that would allow some to melt faster that others.  Typically, larger, denser pieces of ice keep longer.  To combat this issue, I ensure that each cooler received the exact same amount of ice I utilized a large chunk of ice the size of 1 gallon zip lock freezer bag as well.  The bagged ice melted much quicker than the solid block of ice.  To ensure the bagged ice was as close as possible in similarities, I purchased each bag at the same retailer and the same time.

Five coolers are placed in an environmentally controlled area and allowed to acclimate to the temperatures for one week prior to use. 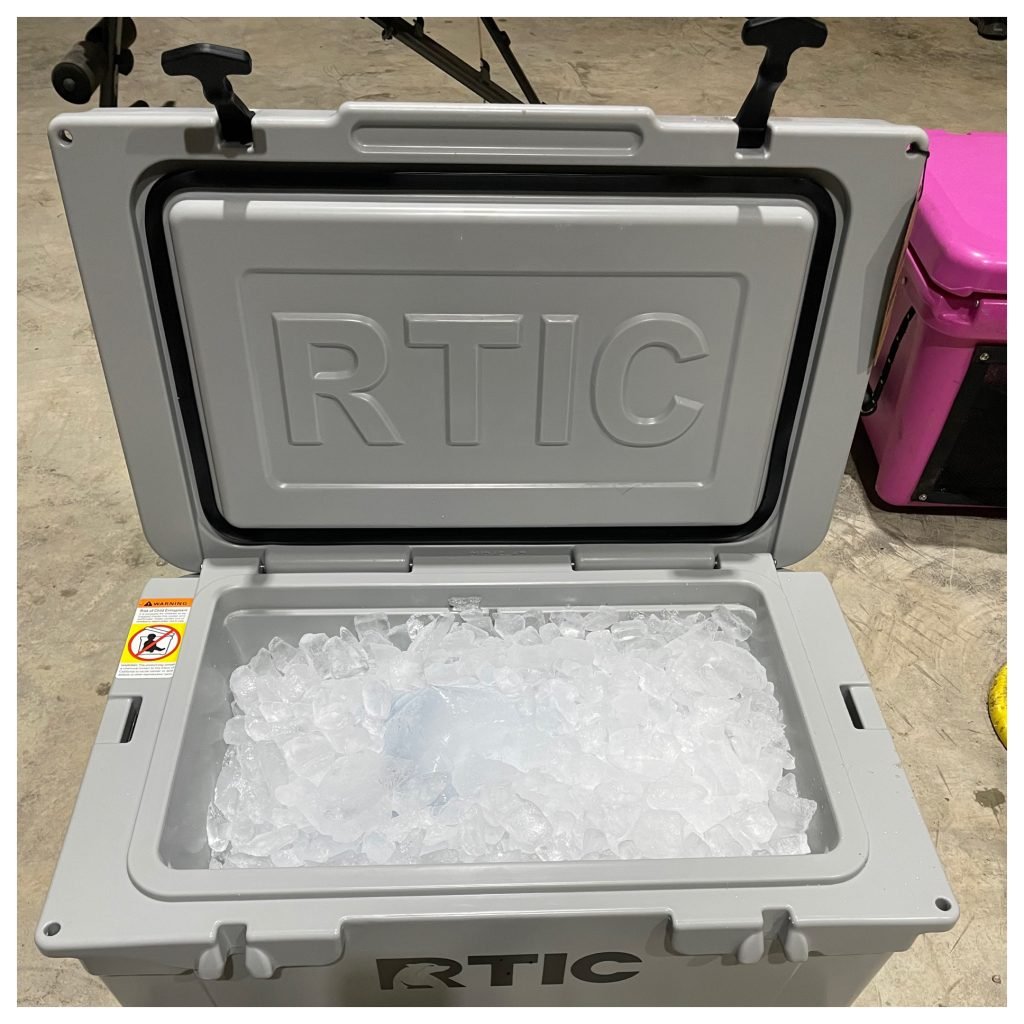 Each cooler is opened for a quick photo to record the progress and all of the water (melted ice) in the cooler was drained.  Only 48 hours into the test and it was apparent that the Grizzly wasn’t going to win the competition.  As the ice melts in each cooler, it turns into a near-solid chunk of ice.  However, the Grizzly looked different than the others because the ice did not touch the sides of the cooler like the others and it is melting much faster than the rest.  The ice not touching the sides indicates that the sidewalls of the Grizzly are not retaining the cold and the ambient air temperature outside of the cooler is making more of an impact on the ice, due to poor insulation. 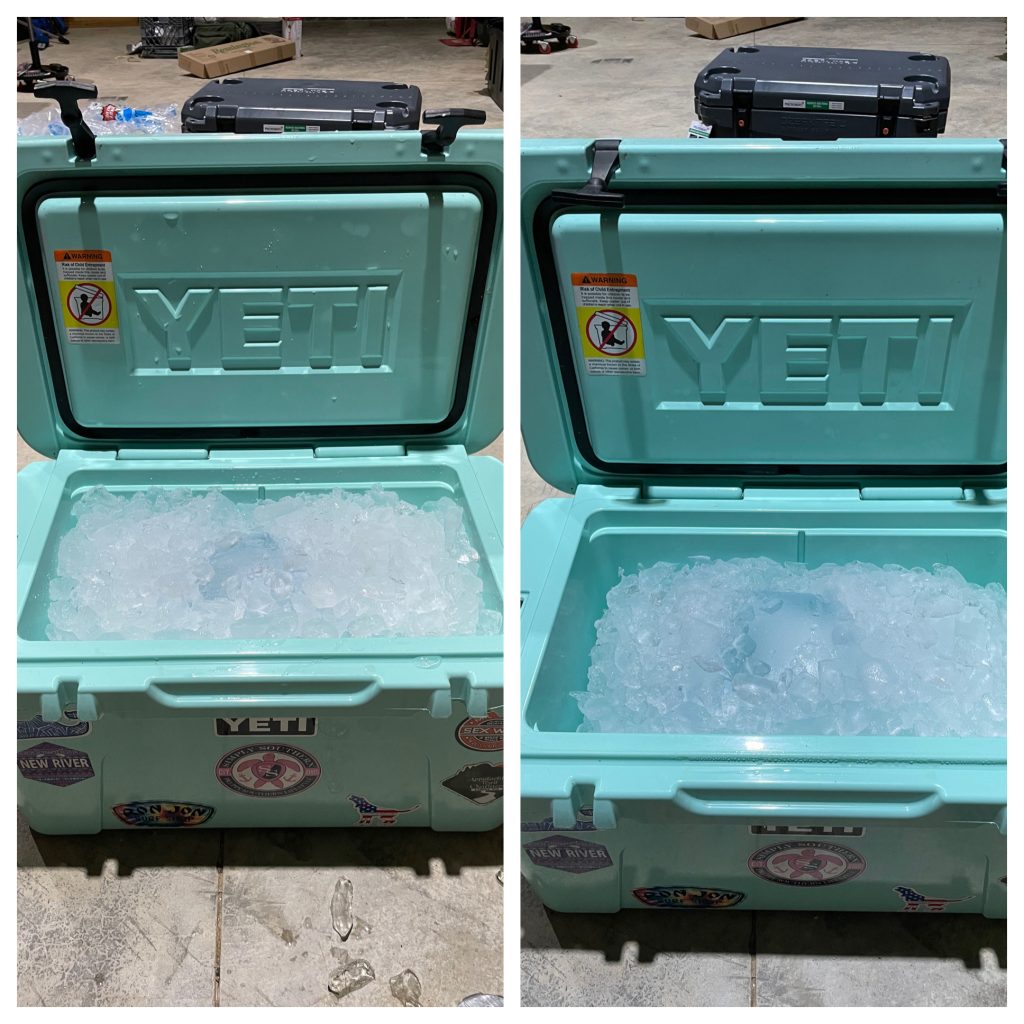 Each cooler is opened for a quick photo to record the progress and all of the water (melted ice) in the cooler was drained.  To keep things consistent and fair, the coolers are open for the same amount of time and the lids were left closed when the water is drained from each cooler.  It’s now apparent the top three coolers are the Yeti, RTIC, and ORCA.  The biggest surprise is that the Ozark Trail is beating my expensive Grizzly Cooler and the Grizzly is clearly in last place. 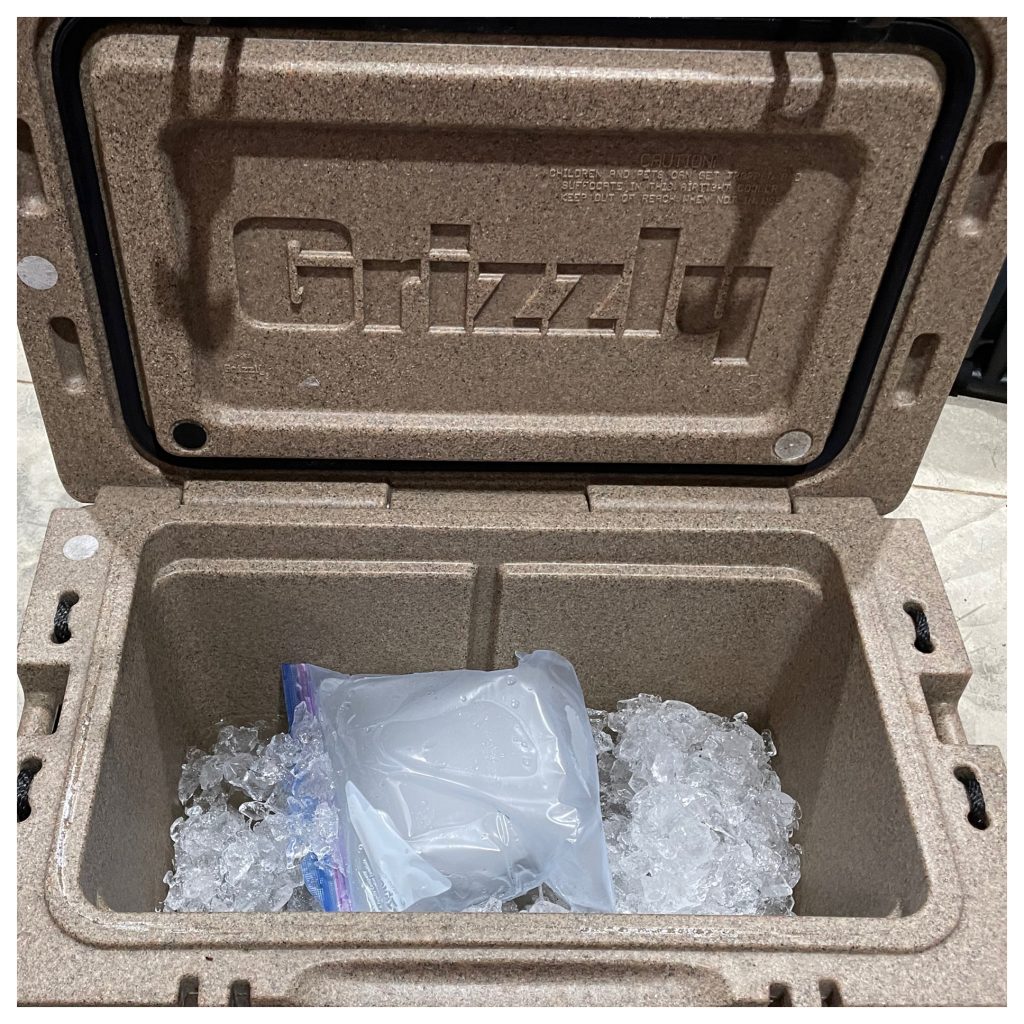 Each cooler is opened for a quick photo to record the progress and all of the water (melted ice) in the cooler was drained.  To keep things consistent and fair, the coolers are open for the same amount of time and the lids were left closed when the water is drained from each cooler.  The bagged ice is more than half gone in each cooler by this time and the solid block of ice is slowly starting to melt.  The Orca cooler appears to be taking the lead but the RTIC and Yeti are right behind it and they’re too close to tell by the naked eye.  The Grizzly will be out of the competition soon and the Ozark Trail is doing surprisingly well for the price, but it can’t compete with the other three coolers in the test. 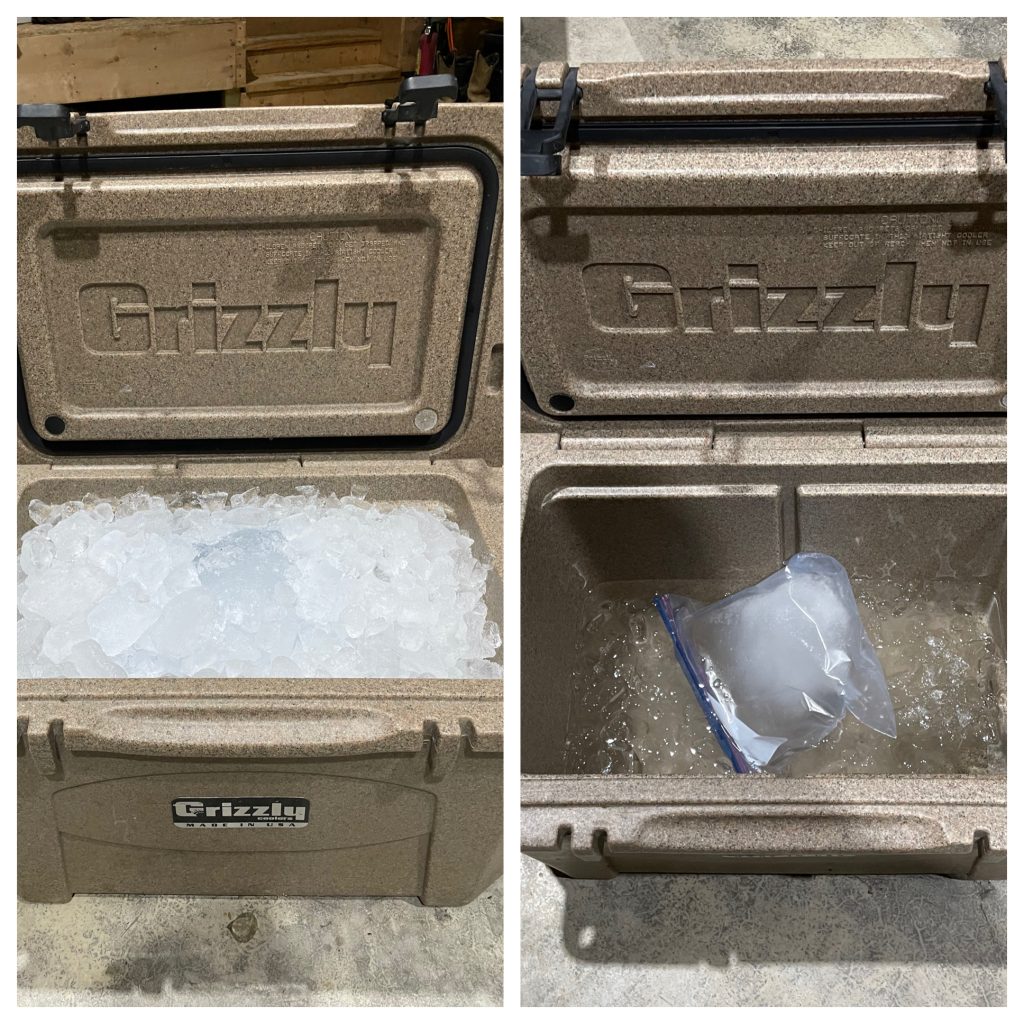 Each cooler is opened for a quick photo to record the progress and all of the water (melted ice) in the cooler was drained.  To keep things consistent and fair, the coolers are open for the same amount of time and the lids were left closed when the water is drained from each cooler.  The bagged ice has completely melted in the Grizzly by this point, so it’s only a matter of time until the solid block melts too and we can remove the Grizzly from the test.  The top three coolers, RTIC, YETI, and ORCA, are neck and neck at this point with no clear winner defined yet. 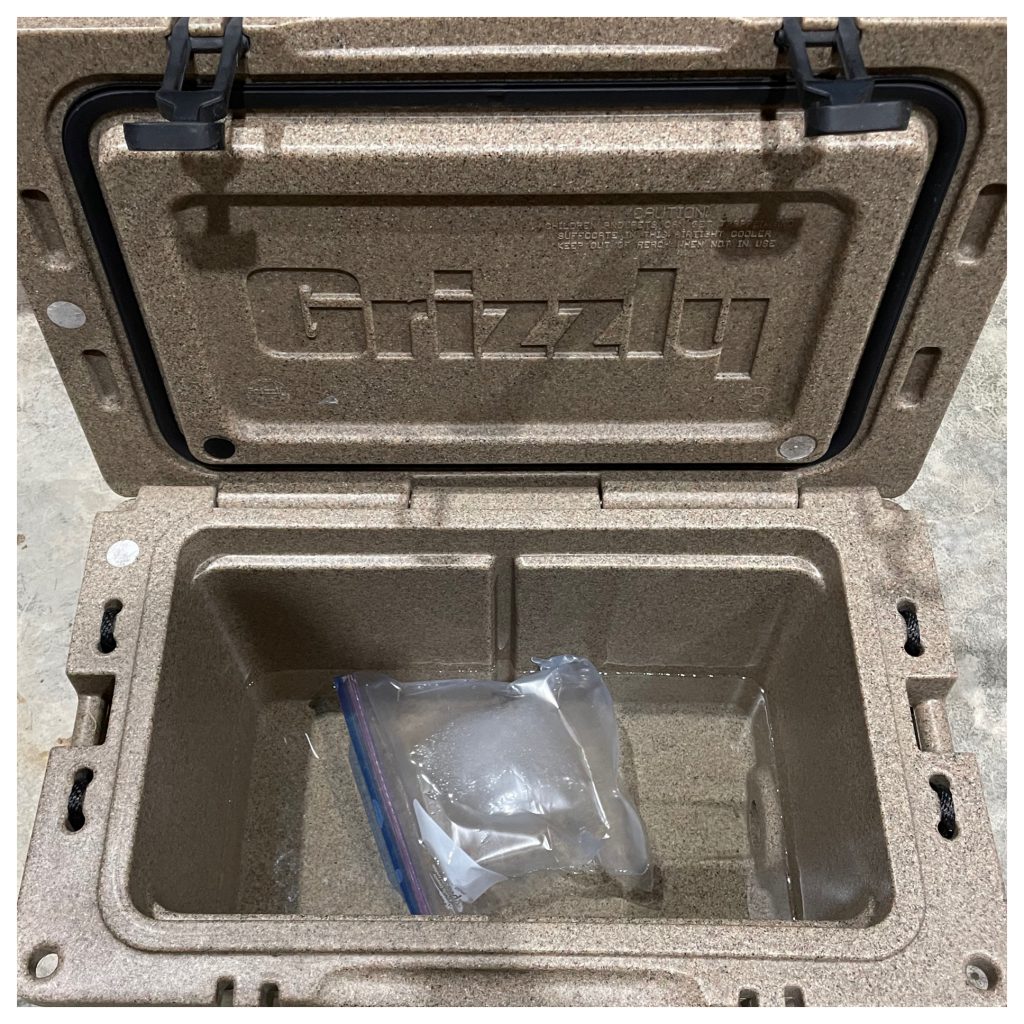 Each cooler is opened for a quick photo to record the progress and all of the water (melted ice) in the cooler was drained.  To keep things consistent and fair, the coolers are open for the same amount of time and the lids were left closed when the water is drained from each cooler.   The first cooler officially eliminated from the competition is the Grizzly!  The remaining ice has completely melted and the Ozark Trail isn’t far behind.  The Orca is looking like the best 45-quart cooler in the competition at retaining ice and the Yeti might be edging out the RTIC for second place.

Each cooler is opened for a quick photo to record the progress and all of the water (melted ice) in the cooler was drained.  To keep things consistent and fair, the coolers are open for the same amount of time and the lids were left closed when the water is drained from each cooler.  The second cooler eliminated from the competition is the Ozark Trail.  Orca is clearly in the lead, with Yeti and RTIC fighting for second place. 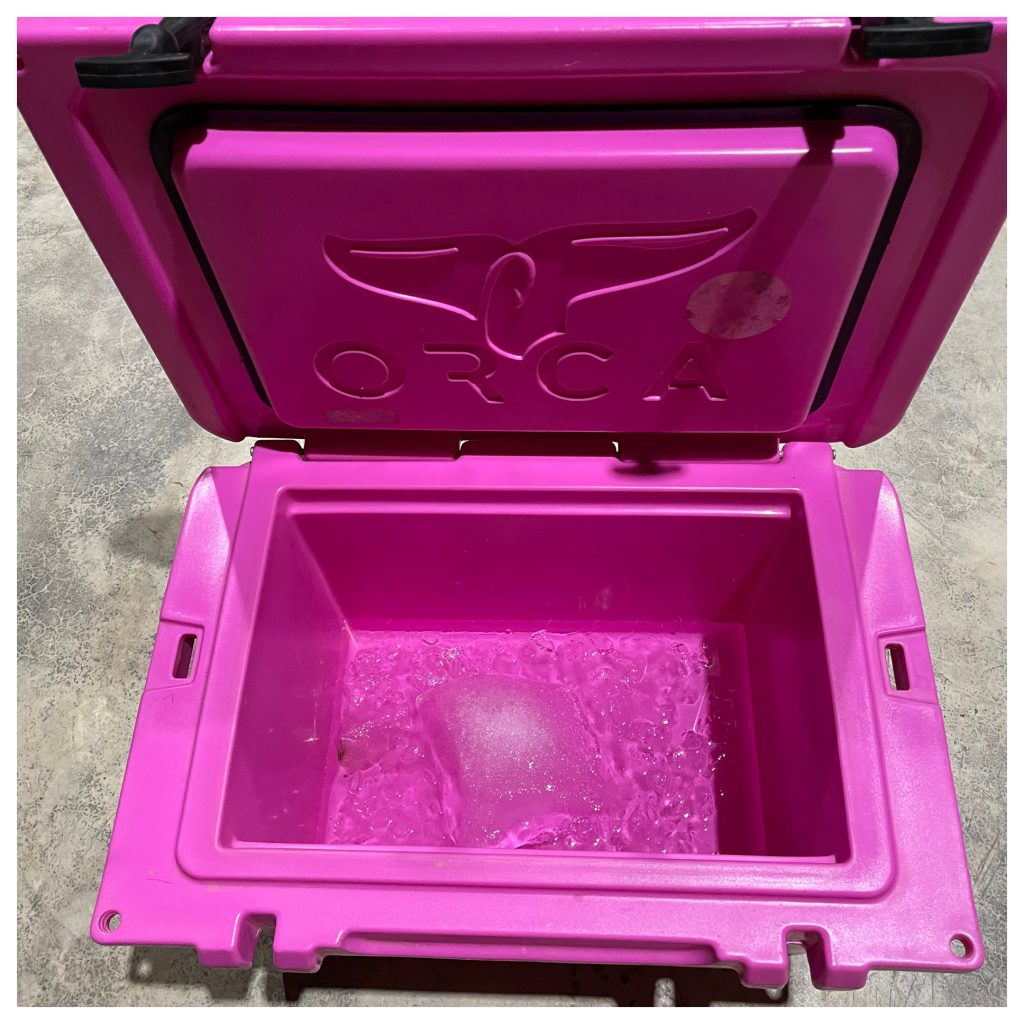 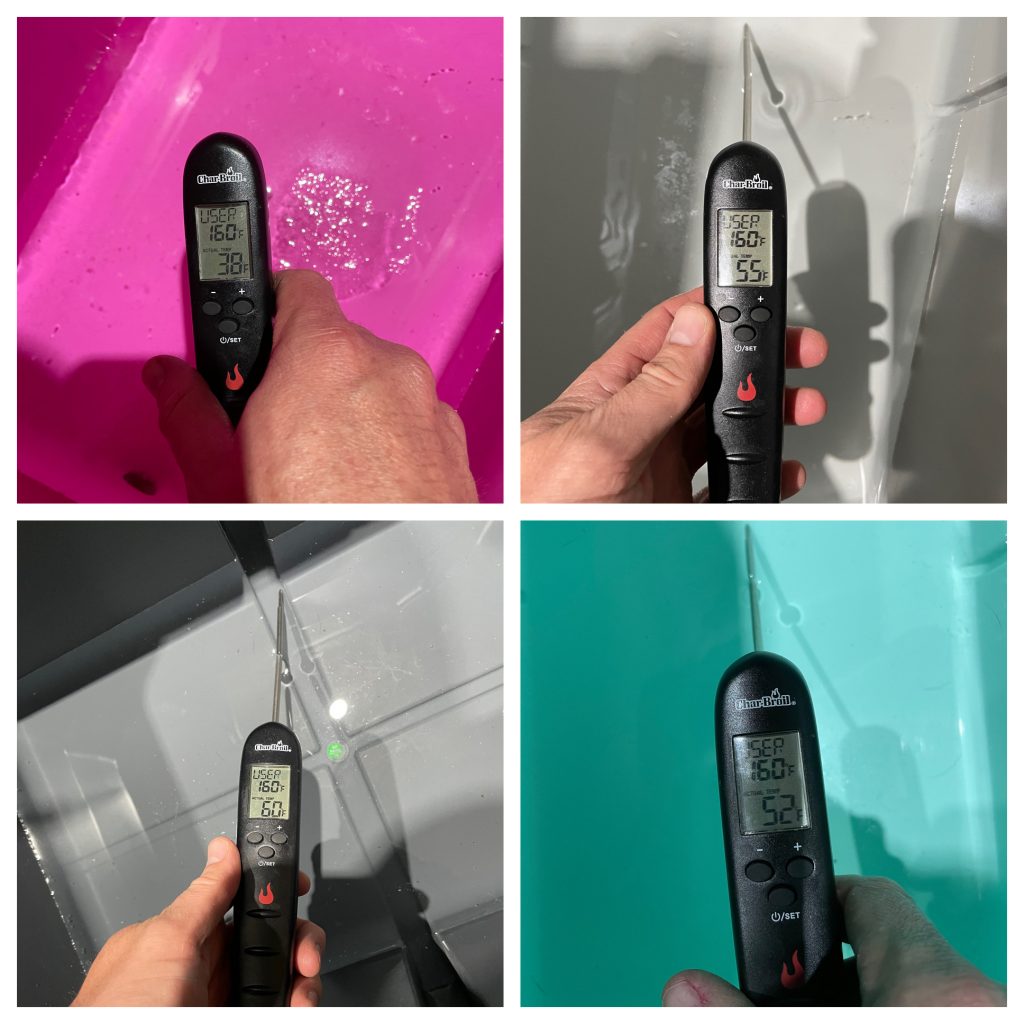 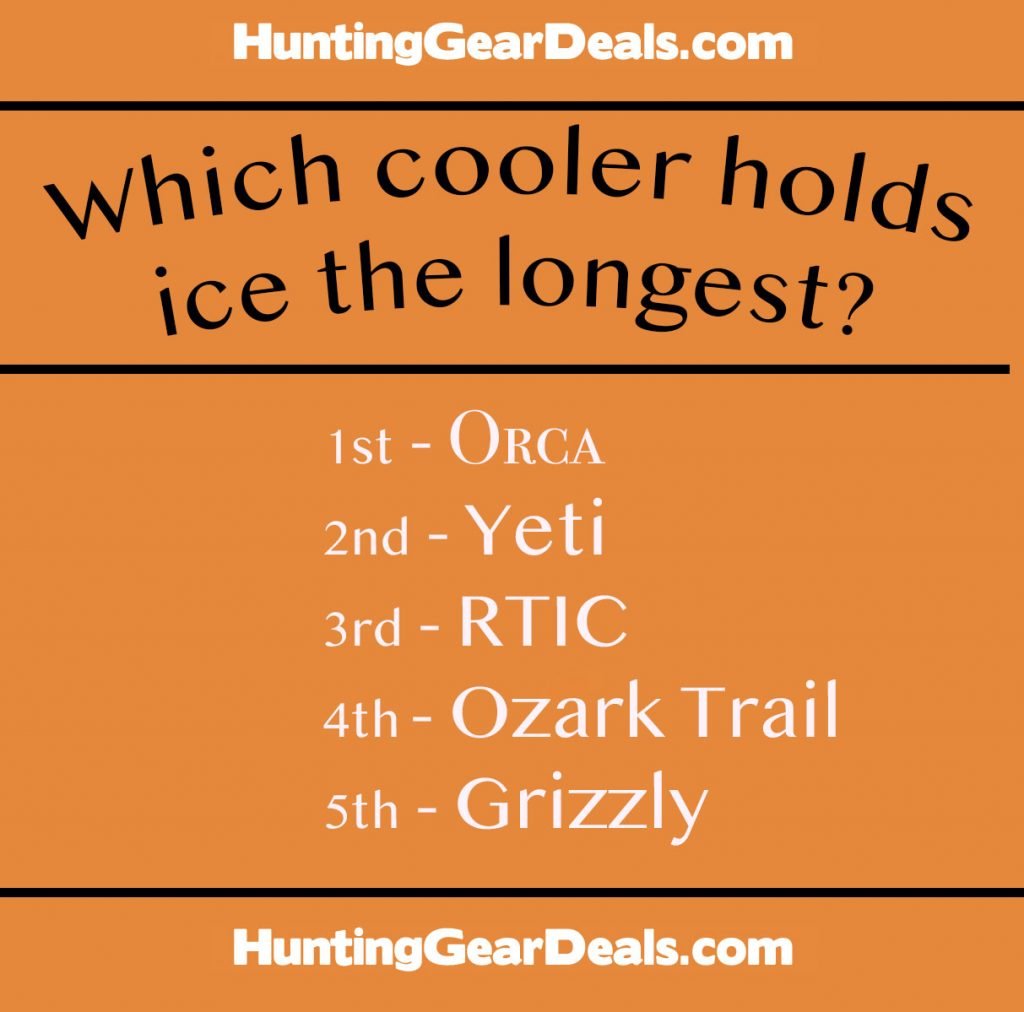 Which 45 Quart Hard Cooler was the best?

The test results are in and the 45 Quart Ozark Trail cooler held ice the longest, followed by a near tie with 45-quart Yeti and RTIC Outdoors.  The least expensive cooler of the test, Ozark Trail, came in fourth and to my surprise, the Grizzly Cooler came in dead last.  It wasn’t even a competition for last place, Grizzly had that one covered.  However, the top three coolers were extremely close in comparison and you can make an argument to buy any of them for their ice retaining capabilities.

How to improve ice retention: 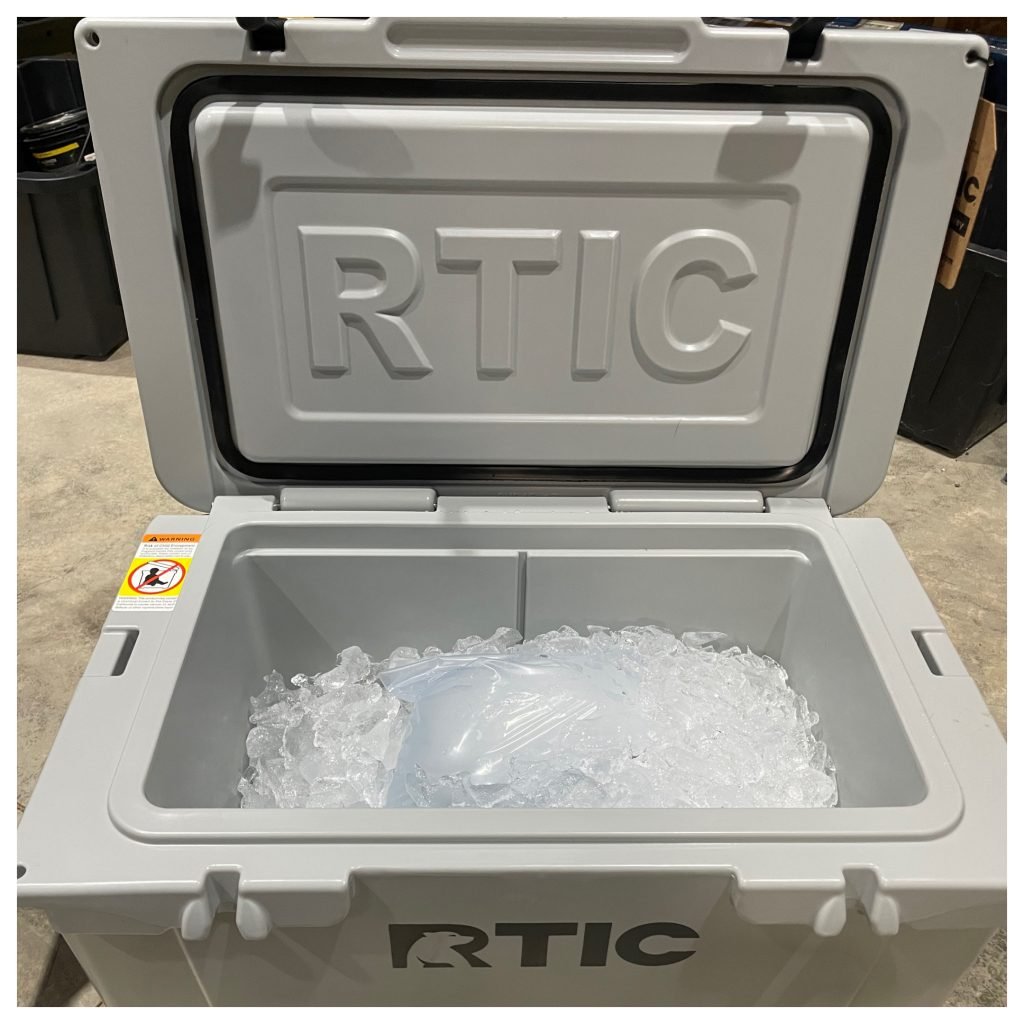 To extend the life of the ice and keep the contents cold, try pre-chilling the cooler with a bag of ice prior to using it when you need it.  This is done by adding a bag of ice and changing it out before it melts with the contents and the ice needed to pack the cooler.  This is easily done but it takes a little bit of time.  The cool thing about coolers is that they’re designed to keep the contents inside of it cold if the cooler is cold.  You could use your cooler to keep something warm just the same as you can keep it cold if you heat up the cooler by leaving it in the sun or putting hot water in it.  People often do this when letting smoked meat rest such as brisket.

Does the size of the cooler make a difference on how long it will retain ice?

Of course, size matters!  The more ice, the longer it’ll keep the contents colder.  However, I wanted to make sure that this product comparison was fair, so I used coolers of the same size.  Each cooler in the review was a 45 quart with the only exception being a 40-quart cooler from Grizzly that I already owned.  I based the entire test on how much ice the slightly smaller Grizzly cooler would hold and added the same amount of ice in the Grizzly as I did the others to ensure a fair test. This should have hypothetically put the Grizzly at an advantage because it was filled to its capacity with ice and the others weren’t quite as full.  The amount of air inside your cooler makes a big difference in how long it will hold ice.

Now, if I would’ve used a 65-quart RTIC Outdoors Cooler against a 45-quart Yeti, then of course the larger 65-quart cooler would win if I filled each cooler to it capacity. In reverse, if I used the exact same amount of ice in differently sized coolers then the larger cooler would have more empty space inside which would reduce the ice retention time.

Is the Orca Cooler really the best cooler of the competition?

After fourteen days of testing, the Orca cooler proved to hold ice the longest.  However, you must take into consideration the size of the Orca Cooler vs the competition.  The Orca Cooler is much larger and heavier than every other cooler in the competition, yet has the same holding capacity.  The Orca retained ice longer but you’re not going to want to move this cooler from place to place when it’s loaded, plus it’ll take up a lot more room due to its larger size.  If holding ice is your only concern, then Orca is the clear winner.

Yeti vs RTIC:  Which hard cooler is better?

Are YETI coolers better than RTIC Outdoors coolers?  Is Yeti worth the price?  When comparing these two coolers is like looking at yourself in the mirror.  Other than price, they’re nearly identical.   I’m not knocking the Yeti, so feel free to pay the higher price for something that is nearly identical in design and functionality.  However, the RTIC coolers seem to be just as capable as the Yeti at a much cheaper price.

Which 45-quart hard cooler is the best value?

The best value cooler in the test has to be the RTIC Outdoors 45 Quart Cooler.  This cooler was neck and neck with the Yeti for ice retention for the entire test.   To be honest, you would probably never see a difference between the Yeti and the RTIC during regular usage due to how small the difference really was.  If I was going to purchase any of these coolers for personal use, it would 100% be the RTIC Outdoors 45 Quart Hard Cooler.  It’s smaller and lighter than the Orca Cooler and heck of a lot cheaper than the Yeti or Orca.

Hunting Gear Deals is funded by affiliate commissions. We may receive a small commission when you buy from our partners using the links provided. There is no additional cost to you. Thanks for supporting us by using our links when making your purchases.