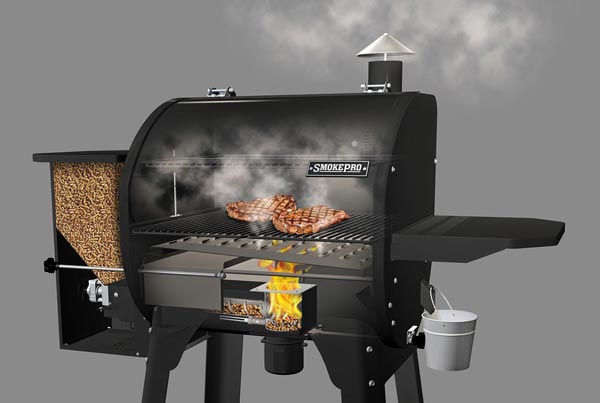 The Camp Chef SmokePro SG 24 WIFI Pellet Grill is a versatile pellet grill perfect for the backyard grill master.  This grill has helped me prepare some of the finest dishes I’ve ever created and I look forward to improving my grilling skills while maximizing the features of the SmokePro SG 24 for years to come.  I hope you find this review of Camp Chef SmokePro SG 24 WIFI Pellet Grill, conducted by an average “Joe” (pun intended) just like yourself, helpful when making a decision before purchasing a new grill.

For over a year I had been interested in stepping up my grilling skills with a pellet grill.  I had researched different brands and models for countless hours, and one brand that stuck out was Camp Chef.  I rarely make a large purchase without doing my homework on the product and company prior.  If you’re reading this, you’re probably just like me.  Through my research Camp Chef had been one of my top choices based on price, quality, and customer reviews. Priced at $700, the Camp Chef SmokePro SG 24 WIFI Pellet Grill is not the cheapest option on the market but it is far from being the most expensive. The construction and features offered by this grill are where the value is found.

When I was offered the opportunity to test the Camp Chef SmokePro, I was excited and grateful. There is definitely a learning curve when transitioning from a propane grill to a pellet grill, but I have been very happy thus far. I found creative ways to use a propane grill to be able to “smoke” pork butt, wings, whole chicken, and brisket, but I was never able to get a good smoke ring or a crispy skin. That has all changed with the Camp Chef SmokePro SG 24 WIFI Pellet Grill! 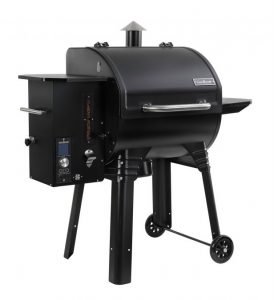 The SmokePro SG 24 WIFI Pellet Grill is the perfect blend of technology and innovation that will help you perfect your backyard grilling techniques.  The Slide and Grill Technolgy has been equipped with WIFI, allowing you to control the temperature of your smoker/grill from virtually anywhere!

When the package was delivered my initial thought was “Wow this is way heavier than I expected”, but as I started to unbox it I soon realized why. The Camp Chef SmokePro SG 24 WIFI Pellet Grill is built very solid!  All of the bare metal is coated with an anti-corrosion coating and every part was well packaged and protected.

Assembly proved to be fairly simple and would be easy even for those who are less mechanically inclined than this Average Joe. All of the more technical pieces are already in place, and you are only adding things to the shell. The entire process took me less than an hour.

The only potential issue I see with assembly is the installation of the hopper lid and handle. You have to be very careful not to drop the screw down inside the hopper because it could potentially fall into the auger. I recommend placing a paper towel across the hopper grate as I did in the picture below. This will help prevent any screws from falling into the hopper. Other than having to take extra precautions installing the hopper lid and handle, I believe that this product was very well thought out by the engineers at Camp Chef. It is recommended to have two people for some steps in the assembly but I was able to complete it by myself by using a little extra caution.  Maybe I’m not your average Joe after all? 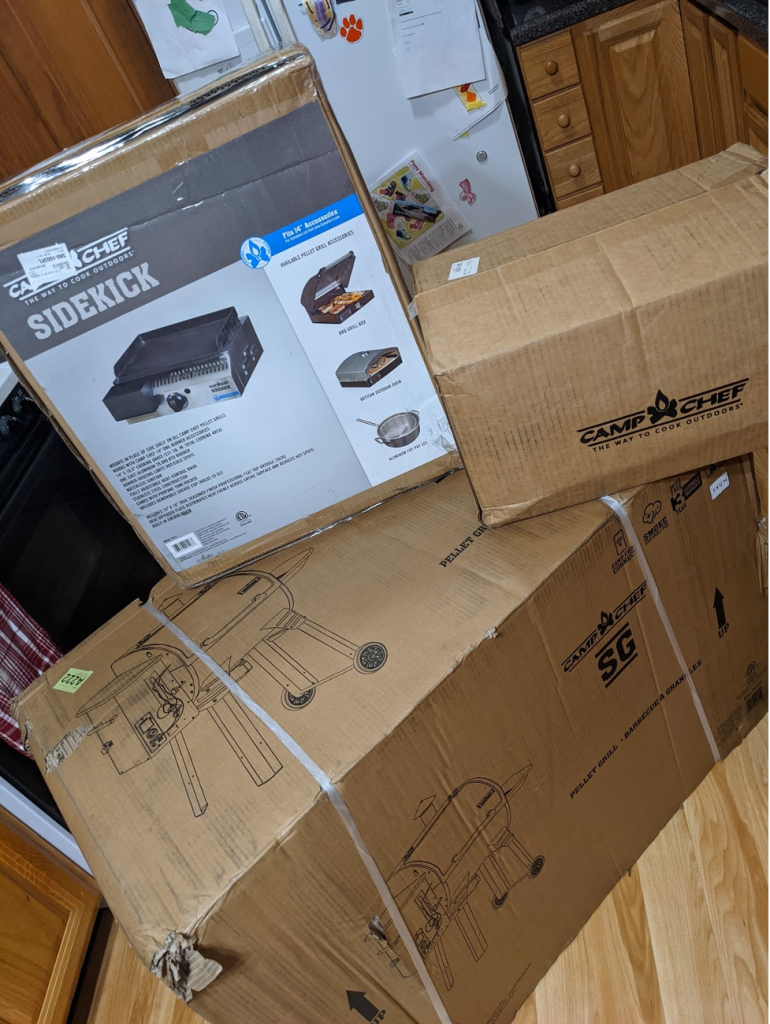 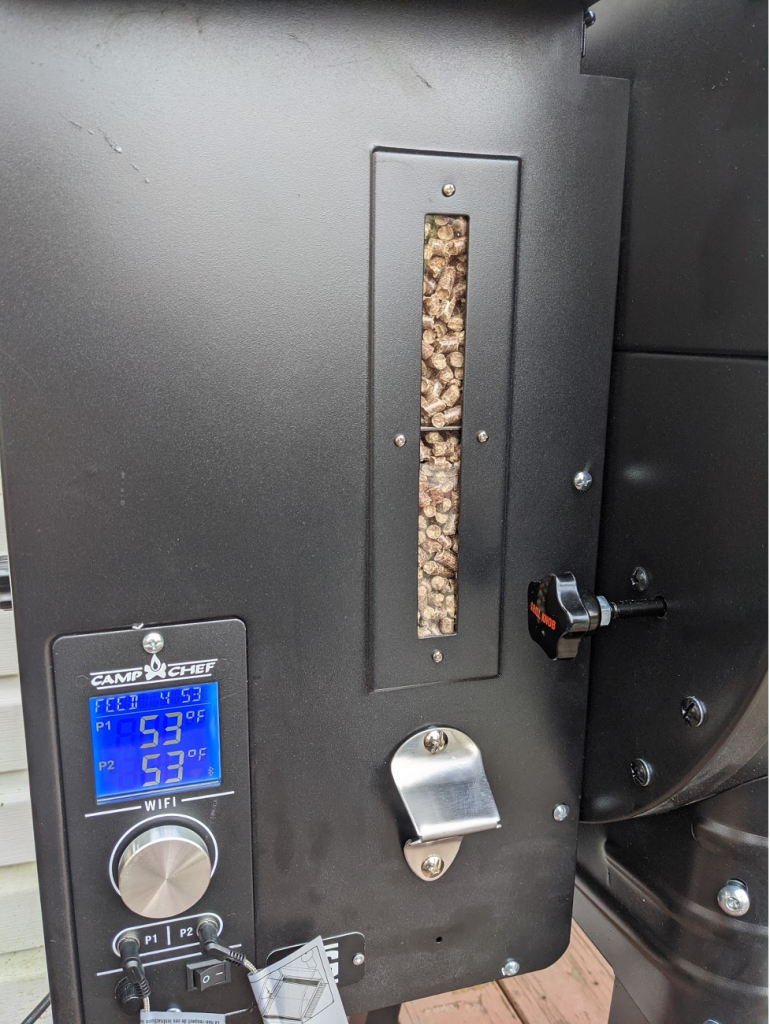 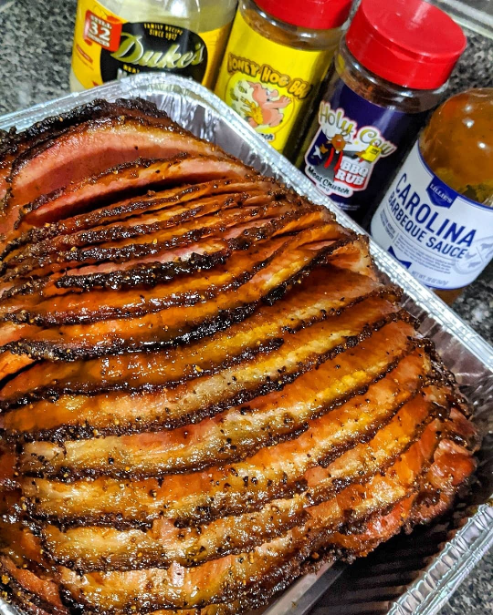 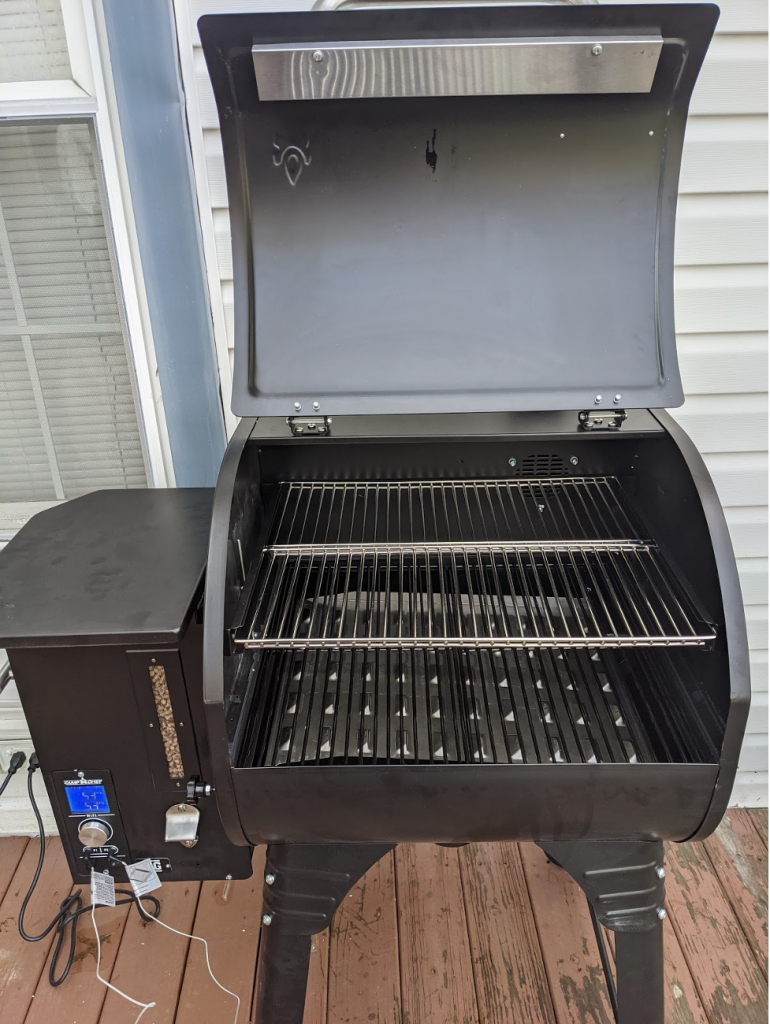 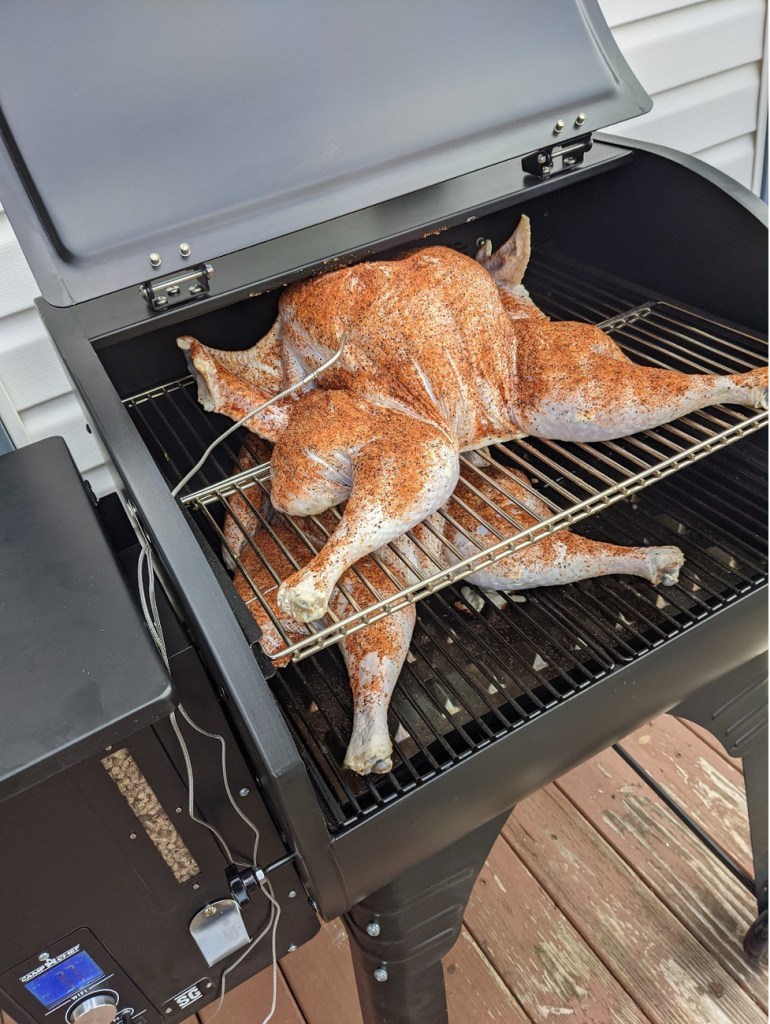 Let’s start to the left side of the grill and work our way over.  The Hopper holds 22lbs of pellets and comes with a viewing window that allows you to see how much is left. The pellet hopper Clean Out makes it very easy to swap out pellets to a different flavor.

Despite the mixed reviews, I found the WiFi Control to be very effective. I wanted something easy to use, minimalistic and effective which is exactly what the Camp Chef provides. You can view and control the temperature of the grill as well as the two probes that come with it, including the ability to set the desired temperature for each probe. I have not experienced any of the connectivity issues that others have described. It looks like Camp Chef may have worked out the majority of the bugs that existed before my review. My one complaint about the app is that it will not go into landscape view. I would love to be able to set up my tablet while it’s charging and just have the app constantly viewable or cast my screen to my Google Hub so that I can keep an eye on it, but it just looks weird on a landscape screen in portrait mode.

Smoke Control is another feature of this grill that I really enjoy. You can control it from the digital control on the grill or by connecting to the app. This grill can roll the smoke!! In my opinion, this feature could be most useful when you only need to have a short cooking time but want to infuse a lot of smoke flavor. In my case, I smoked a spiral ham for approximately two hours to heat it up but cranked up the smoke and you would have thought I had smoked it for 8 hours. Another time, I used it I was making smoked queso. I only needed to melt the cheese and get a good consistency. I didn’t need it to be on the grill for more than an hour so I cranked up the smoke again and it was awesome.

Back to the two Probes mentioned before, I found them to be very close in temperature to what my Therm-o-works probe read. I also like that you are able to feed them through a hole in the side to keep them out of the way of the lid. Not only will this allow you to maintain the seal on your lid, but it will prolong the life of your probes by not forcing them to be pinched or pressed against a hot surface.

In regard to the main compartment, there are 811 square inches of grilling space. The top two shelves can be adjusted by about an inch to allow more or less height clearance as needed. I also love this because I can put one item on the back upper grate and drop the front upper grate an inch to keep them separated. There is so much room on this grill that I was able to cook two twelve-pound turkeys that I had spatchcocked on Thanksgiving.

Another useful feature of the main compartment is the Slide-n-Grill. This allows you to be able to move the metal plate that covers the flame and helps distribute the heat more evenly. When you move the plate it allows the flame to be more direct and acts as more of a propane or charcoal grill style heat allowing you to get a higher temperature for those burgers and steaks.

A feature that does not get enough credit is the Ash-Cleanout System that makes cleaning out the leftover ash from the pellets as easy as pulling a bone out of a perfectly smoked rack of ribs.

Now on to what can really set this grill apart, the side attachments. The Sidekick and Sear Box are incredible. Mine came with the Sidekick. This attachment puts out a whopping 28,000 BTU’s. I think my wife might have been even more excited about this attachment than I was. Now I’ll be able to do all of my deep-frying outside on this burner where I can avoid smoking up the house. This also comes with a hook that attaches to the back of the grill to hang your propane tank. A flat top griddle that has been seasoned and is ready to go is included and I can’t wait for it to warm up here so I can make breakfast on it because, as we all know food just tastes better when it’s cooked outside.

After researching new grills for more than a year, the perfect grill fell into my lap at just the right time.  I have had the opportunity to use the Camp Chef SmokePro SG 24 during the fall and winter months and it has exceeded my expectations. My family and I are looking forward to grilling season officially starting this summer in which you’ll find me front and center tending the grill. I am confident that this grill will continue to impress and last a very long time.

From the construction to the ease of being able to move it, to the price point, to the features, to the versatility of what I will be able to cook, this is the grill I will recommend to anyone who asks. I believe it is a must purchase for the backyard grill master ready to take their game to the next level. Our home has been the go-to place for great food and I look forward to sharing great food with good friends for years to come.

Ready to buy?  Follow this link to pick up a Camp Chef SmokePro SG 24 WIFI Pellet Grill of you own!

Thanks to Joe for writing this unpaid gear review.  Hunting Gear Deals is funded by affiliate commissions. We may receive a small commission when you buy from our partners using the links provided. There is no additional cost to you. Thanks for supporting us by using our links when making your purchases. 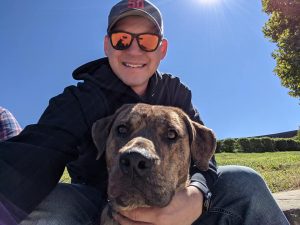 Joe lives in Parkersburg, WV with his wife and two children. For his day job, Joe is a salesman with a background in management, however, his passion is volunteering.   Joe is a volunteer firefighter within his community and a pillar within his church.  The same church that Camron (the owner of Hunting Gear Deals) and Joe first met.  When Joe isn’t volunteering, you’ll find him preparing delicious meals for friends, family, and even strangers.