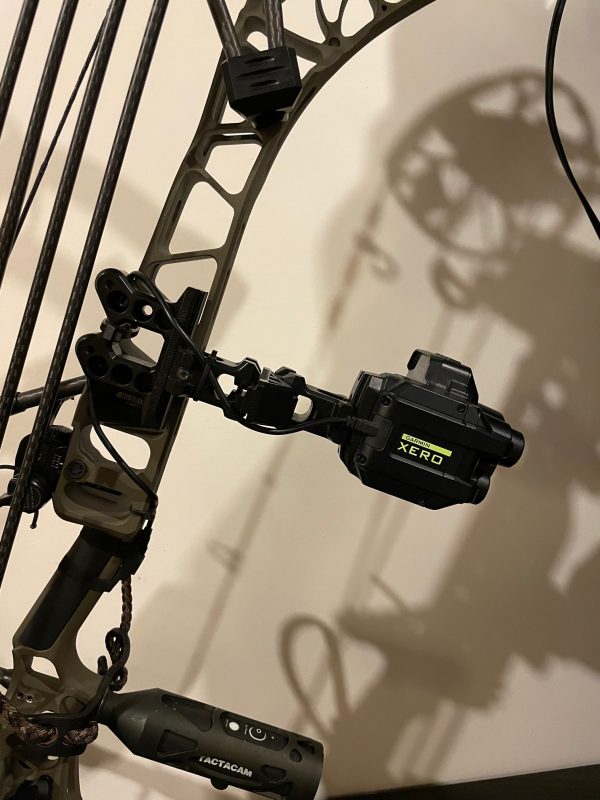 Nearly a decade ago you could find me perched in a tree near Red Wing Minnesota, attempting to bag a whitetail deer for the first time.  Two and half years later, I shot and recovered my first doe. Since then I’ve killed fourteen deer including a couple of good bucks. I tell you this because I want to be transparent with my hunting experience. I’m not the most seasoned hunter on the planet, but I have gone down many archery related rabbit-holes that I hope to help you avoid.

I started hunting later in life. Currently, I’m a 49 year old with an addicition to bowhunting. I’ve taken the Shot IQ course by Joel Turner. I’m a disciple of the School of Nock by John Dudley. Bowhunt or Die is my favorite show. In other words, I’m all in. I shoot my bow almost every day and I’m obsessed with mature whitetail deer. I’m up to my ears in podcasts. Simply put, I live and breathe bowhunting.

Three seasons ago, I walked into my favorite bow shop and enquired about the IQ Define Range-Finding Bow Sight. I had been using the IQ Retina Lock Technology for a while and it really helped me mitigate my torque issues. I liked the idea of a ranging site that would still help me keep my riser torque in check. I thought the IQ Define was the ticket. When I mentioned this to the shop owner, he told me that he would recommend the Garmin, because it basically does the same thing, but with more advanced technology (more on that later).

He showed me his bow. It was very similar to my setup, minus the fact that his bow was sporting the A1i. By now, the shop owner Dan had sold me many things. He had never steered me wrong. Even though the Garmin, was significantly more expensive than the IQ Define, I told him to throw it on my bow and I’d give it a go. 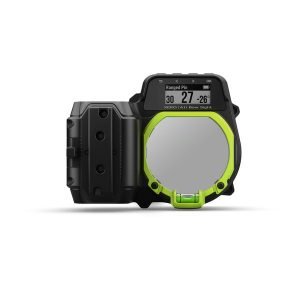 The Garmin Xero A1i is the most technologically advnaced archery sight on the market today!  With its built-in rangefinding technology, you’ll never have an excuse for missing your target again!

Invest the Time Into Setting Up the Sight

Dan spent some time helping me set it up. The first thing you do is set your 20-yard pin. Once you get that dialed in, you set the reticle. The reticle is a dot and a circle inside the viewfinder. In order to range a target properly, you need to have the dot inside the circle. (Not only does the reticle allow you to range your target, it serves a dual purpose. It will tell you if you’re torquing your bow in a similar way to the Retina Lock technology. This feature sold me on the sight).

There are adjustments on the A1i that are dedicated solely to dialing in the reticle. You dial in the reticle by drawing back your bow, letting the bow settle naturally, looking through the site, and adjusting the up/down and left/right reticle adjustments until the dot is in the circle. Once the reticle is dialed, you might have to readjust your windage again slightly, but when you have your twenty-yard pin and reticle set, the rest of the setup is fairly simple.

Dialing in the rest of your yardages is a matter of following the prompts that are automatically given to you by the sight. It will ask you to range a longer distance, then shoot an arrow. After each shot, it will ask you if the shot impacted low or high and how many inches. You answer the questions and soon your sight is set up to all your desired yardages. It uses all your calibrated yardages to create fixed pins. The calibrations you set will also give the sight the information it needs to calibrate all of the distances in-between. In my experience, it is deadly accurate.

The first time I set it up, I made the mistake of having my 20 yard pin too low. By the time I was setting my 60-yard pin, I was out of room. I shoot 500-grain arrows, so the arrow drop is greater than many “standard” arrow setups. (Which is another reason I love the Garmin A1i – more on that later). Because my 20-yard pin was too low, I had to use the gang adjustment to raise all of my pins, re-sight in my 20-yard pin, and readjust the reticle. Just keep that in mind if when you sight the A1 or A1i in for the first time. If you want to have the capability to shoot out to 80 yards and beyond, you’re going to need to have your 20-yard pin fairy high in the sight housing. I don’t shoot past 80 yards even in my practice and I can do that within the sight housing with a 500-grain arrow at 70# and 29” draw. 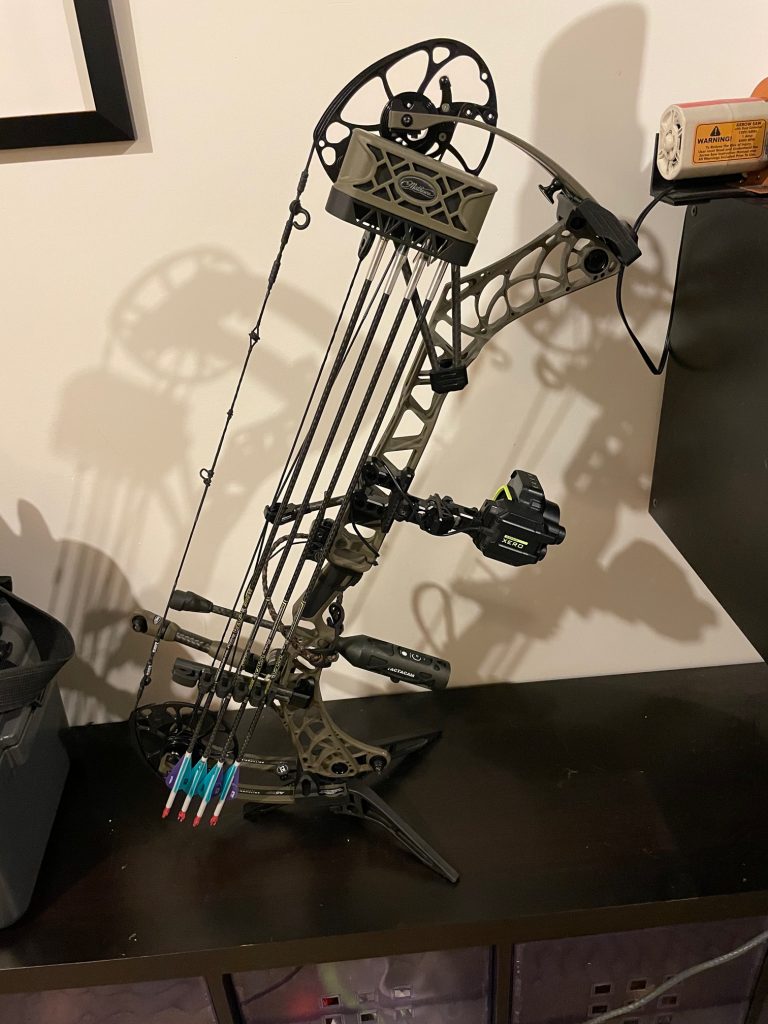 That brings me to my first “con” for the sight. It doesn’t slide, so the arrow weight, draw weight, and draw length are going to dictate how far you can shoot with this sight. But, if you compare it to a fixed pin sight which many bowhunters use, it’s really no different. If you are used to sliding your sight down to get 100 yards and beyond, this sight may not be right for you.

With that being said, there is also a “pro” that can be mentioned in the same breath. Because I shoot a heavier arrow, my trajectory arc is greater than it would be if I were shooting a 350-grain arrow. When I use a standard 5 pin sight, my gaps are fairly large. My potential to hold the pin too high or low is greater with a heavier arrow. With the Garmin, that is not an issue. Just hold the trigger down on your target, let go and the pin drops precisely to that yardage. It’s a huge deal for heavier arrow setups, especially for distances past 20-30 yards. Since I have had the Garmin on my bow, I have recovered every deer I have shot. Not all my shots have been perfect in terms of windage (my fault), but elevation has been dead on and that is due to the sight’s accuracy.

On many online forums, I see people are concerned with battery life. This is understandable. You don’t want your battery to go out when you’re drawn back on the buck of a lifetime. All I can say is two lithium batteries seem to last forever. I switched mine out at the beginning of this year because the gauge showed that my old batteries were half discharged (after two full seasons!).

My battery gauge still shows full charge right now after hunting and shooting almost every day since September 1st. And, I never turn it off manually. I have it set to automatically turn off every 24 hours. As long as I remember to check that it’s on when I get to my stand, I’m golden.

There is a safety built into the sight as well. If you end up with a low battery, your range finder may not have enough charge to work properly. In that case, you can just touch the trigger and your fixed pins will show up. (At every distance you calibrate the sight, it will create a fixed pin).  So worst-case scenario, you’re back to a fixed pin sight. I’ve never had to do that except once at the range.

The one time I had to use my fixed pins was at the range when my sight “froze”. It wouldn’t range, but I was able to punch the trigger and my fixed pins did show up.

So yes, it did freeze on me, once. I have no idea what happened, but it did happen, once, out of thousands of shots. If it happened to me on the buck of a lifetime, yeah, I’d be pissed and I’d have to consider going old school again, but as of now, I trust it implicitly.

I did update the software last year. It was a fairly straight forward process. Unless they add some new features, I think I’ll just leave it as it is. If it ain’t broke…

Does it Fog Up?

One time on a very humid spring morning I went out to practice. I drew back and the glass was slightly fogged up. I could still see through it and was even able to take a good 30-yard shot. After that incident, I bought some anti-fog spray and applied it to both sides of the glass lens. I’ve never had any condensation problems since.

This sight is going to add one more step to your shot process. When you draw back, you’ll have to anchor, hold the Garmin trigger, align the reticle on your target and drop the pin, before you pull through your shot. This will add a second or two to the sequence. I range every time I shoot when I’m practicing so that it’s just second nature. When I’m fresh, it’s not an issue, but after 50 shots or so that extra second or two can lead to fatigue, especially when you’re drawing high poundage. But, the fact that you’ll never need those five seconds in the field, before you draw, to range your game, makes it all worth it. 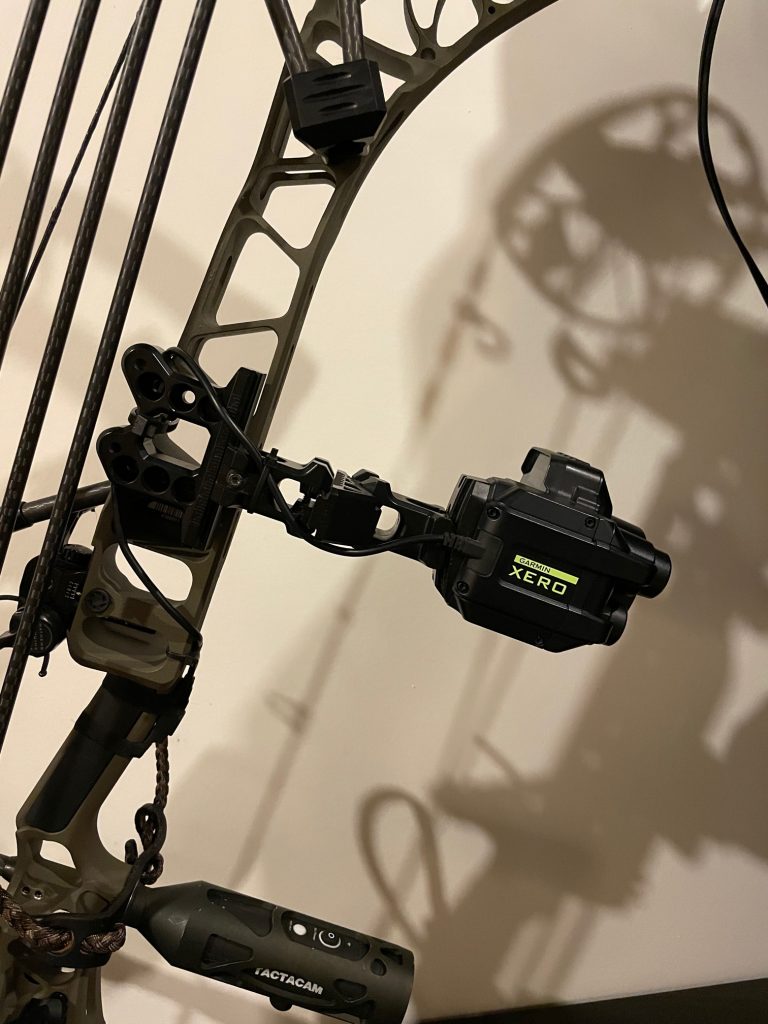 The sight is bombproof, accurate as all get out, and a pleasure to use once it’s all set up. Set up takes a little more time than a standard sight but the benefits outweigh the time it takes to set it up.  To be honest, once it’s working properly it feels a little like cheating. It’s like having a buddy beside you ranging the animals for you.

As long as it’s legal where I hunt, this will always be on my bowhunting rig. The fact that I have never lost an animal that I’ve shot since I’ve had it on my bow makes it more than worth the detailed setup and the price.

If the price is the only thing keeping you from taking the leap of faith and purchasing one for yourself, you might want to consider the Garmin Xero A1, which retails for $799. The A1 has all red pins and only allows for one arrow profile to be stored on the sight.

Ready to buy?  Follow this link to pick a Garmin Xero A1i Bow Sight of your own.

Thanks to Perry for writing this unpaid gear review.  Hunting Gear Deals is funded by affiliate commissions. We may receive a small commission when you buy from our partners using the links provided. There is no additional cost to you. Thanks for supporting us by using our links when making your purchases. Perry lives in Newport, MN with his wife and five children. For his day job he runs a music facility called Taylor Sound in Saint Louis Park, MN, where musicians rehearse and create web content. Playing rock music has been a passion for him since high school. He is also a martial arts practitioner and an avid bowhunter.