As an avid hunter and land steward, I take pride in improving the habitat I hunt on. That has resulted in owning a few different spreaders over the years. Sportsman’s Guide recently asked me to use my experience to review their 125# Capacity ATV spreader. 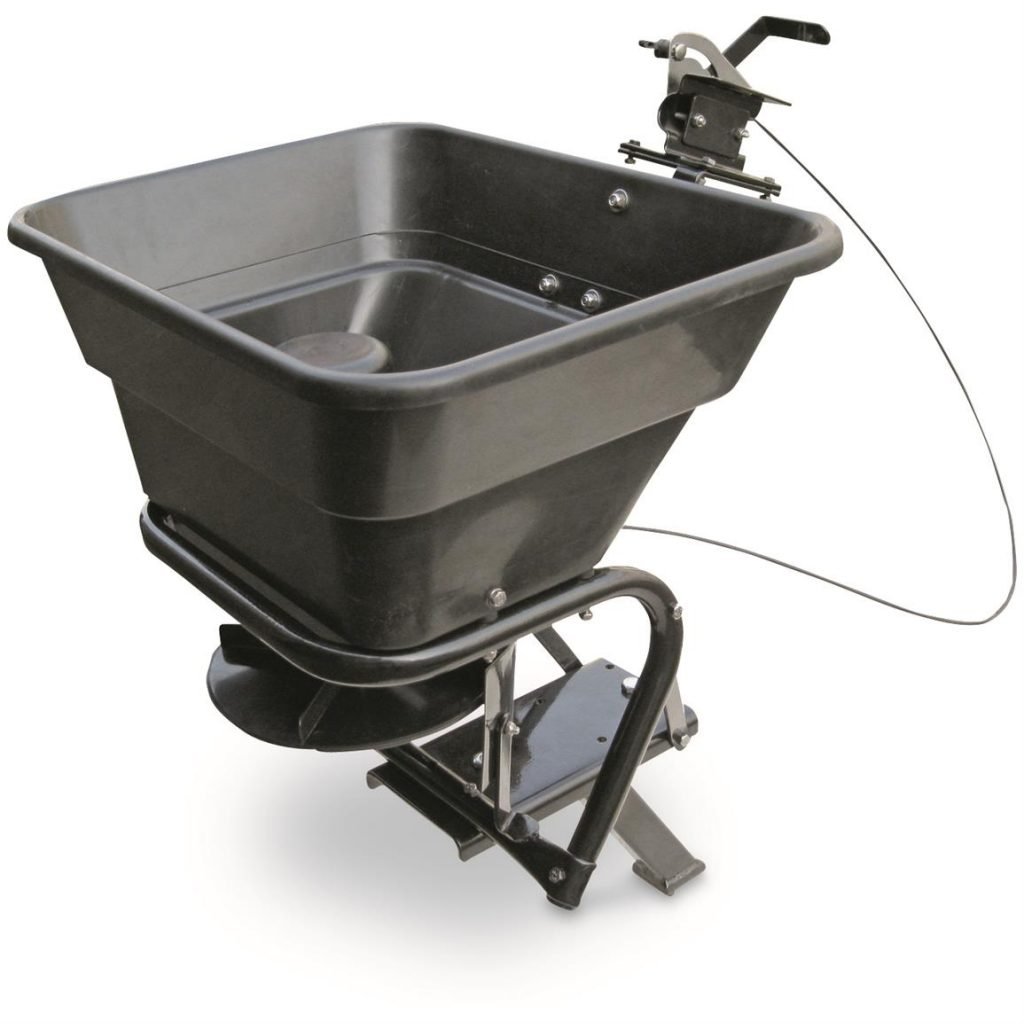 Hop on your ATV, UTV or utility tractor and spread seed and fertilizer easier and quicker than ever with this receiver-mount spreader.

When I first saw the spreader, I was intrigued by the capacity of the hopper and the ability to attach it to your UTV/ATV with a 3rd-party receiver hitch add-on. It was reasonably priced for the average hunter coming in under $250. I tested out the hopper this year on my hunting lease planting summer plots and chufas for deer and turkey. I was able to try it out on my ATV and UTV for a more complete evaluation.

The hopper attaches to the ATV easily with the addition of an aftermarket receiver adapter. This is much more convenient than the semi-permanent installation of most spreaders requiring U-bolts. Guide Gear includes ample wire for connecting the motor of the spreader and your ATV or UTV battery underneath the seat. The spreader motor itself is sealed for protection and sits inside the hopper, which is excellent. It has a 12V motor that spins the disc at an impressive 570 rpms effectively covering a 12′ width. 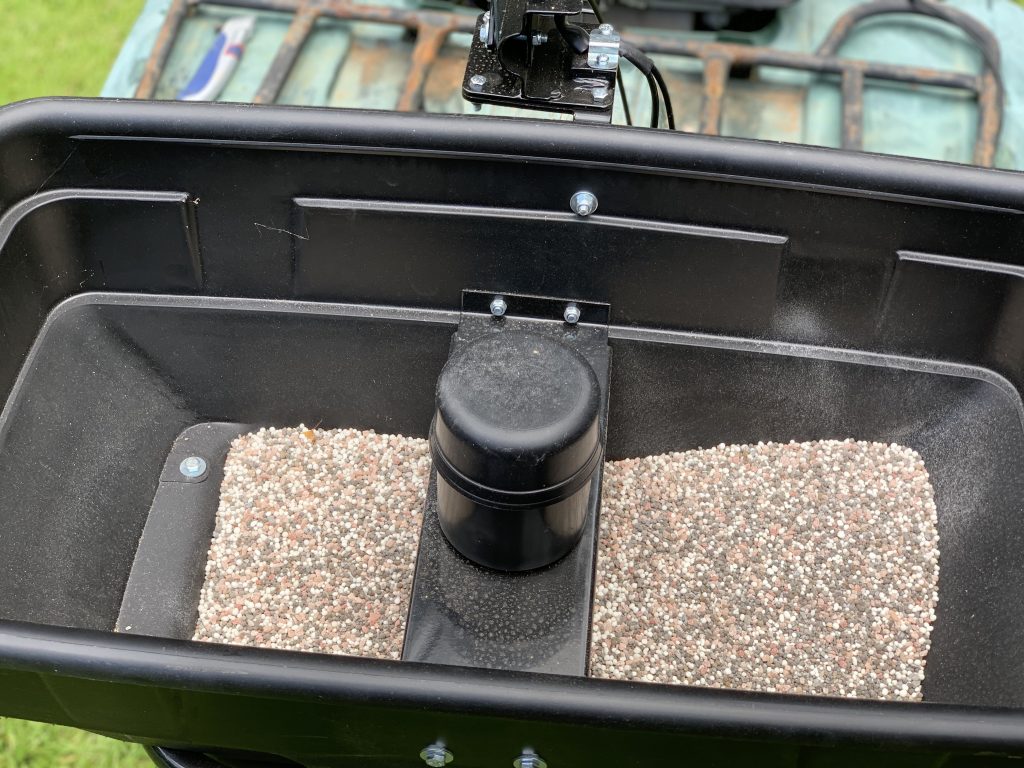 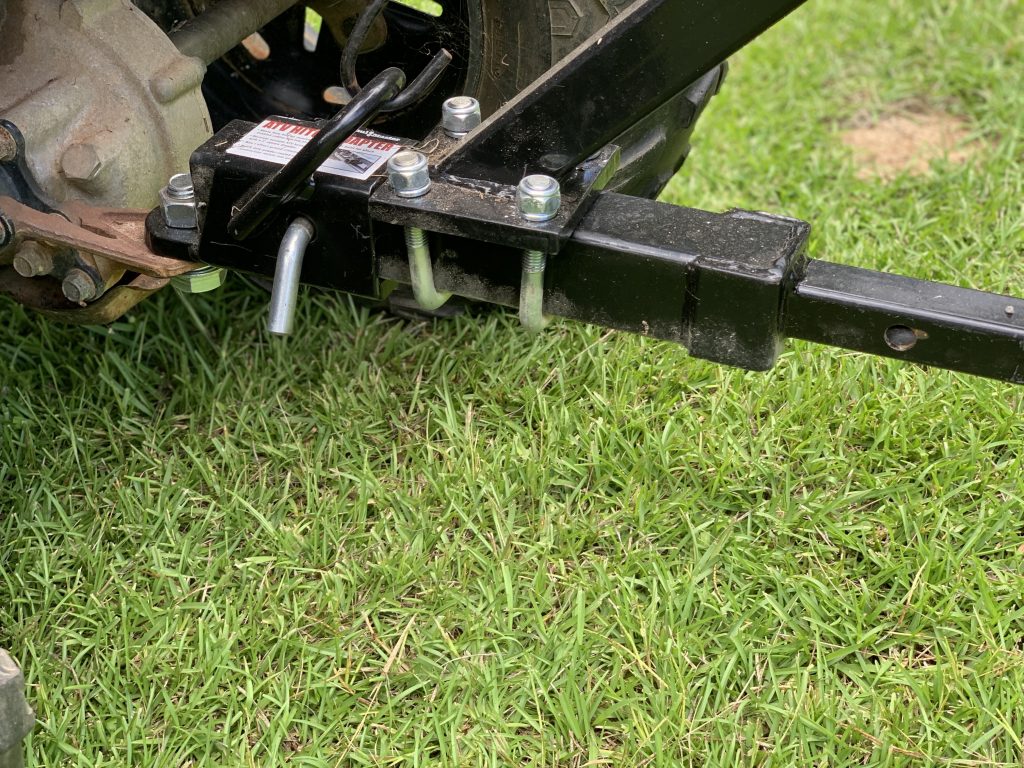 The handle operating the material gate as well as the motor toggle switch are conveniently located within arms reach from the seated position of your vehicle. The deflector shield is a welcomed addition to keep most of the seed and fertilizer from hitting your ATV/UTV. Rinsing your spreader and ATV is still required, but this deflector will help protect from corrosion and prolong the life of your equipment. The whole apparatus is well built, substantial in mass, and should last a long time. 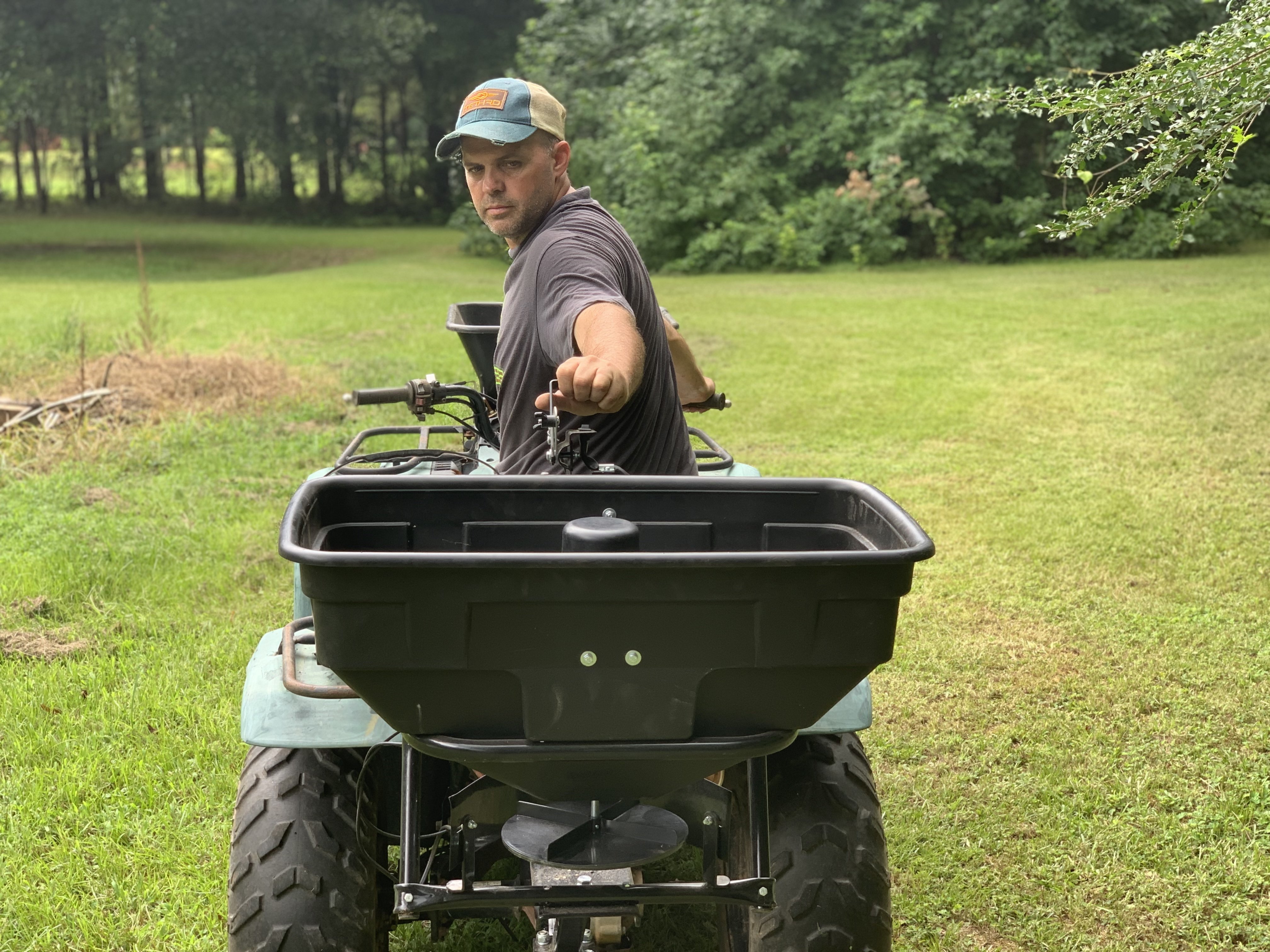 The assembly instructions leave something to be desired. Although I was able to assemble with the help of a patient spouse, it wasn’t the smoothest of jobs. It seems like the instructions were written in Chinese and then translated into English. I had to redrill a couple holes on the crossbar of the spreader support arm since the holes did not align.

The hopper with the receiver hitch is a bit top-heavy, so I used a ratchet strap attached to the back rack on my ATV to keep it level.   You could possibly use a wedge inserted into the receiver to remedy this as well.

The cable operating the slide gate struggles to open and close under a load. It seems fertilizer granules get under the slide mechanism and don’t allow it to close at times. I read where someone modified this using a bolt attached to the plate to make it close off better. I usually only put 50 lbs at a time anyways, so this isn’t a big issue. 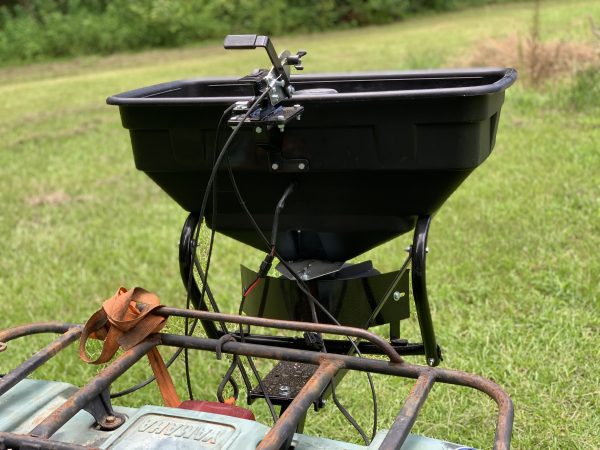 Sportsman’s Guide Stands Behind Thier Gear

After using the spreader a few times, for an unknown reason, the motor quit functioning. I reached out to customer service, explained the situation, and they sent me out a new spreader.   They attributed it to faulty wiring or possibly a bad motor. They allowed me to keep the old spreader so I wouldn’t have to hassle with shipping such a large item. About a week later, I received the new spreader.   I assembled it once again and connected it to my ATV. After running it through several dry runs, I have not had any issues with it. The first spreader may have had a motor/wiring issue, but Sportsman’s Guide customer service made good on it, and the new spreader has worked great. I was very pleased with their willingness to help and can now wholeheartedly recommend the spreader. I’ve had a different experience from other companies in the past, and customer service has not been as willing to do what it takes to make it right. I’m very pleased with the response to my problem and the product as well. 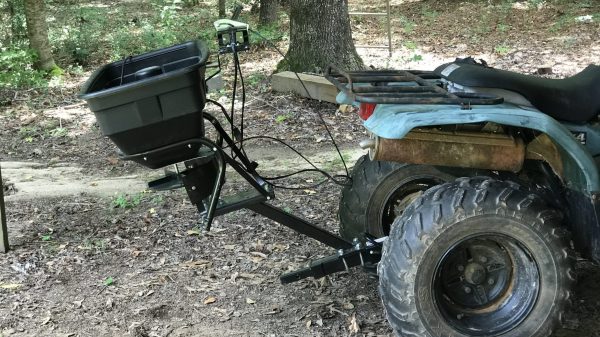 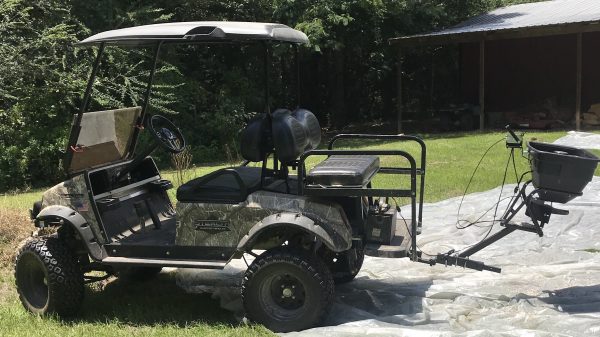 Overall the spreader did what it was designed to do.  It attaches and detaches from the receiver hitch easily so you can store away when not needed. The seed and fertilizer spread to an adequate width, and the controls were within arm’s length from the driver’s seat of the ATV, although the UTV configuration didn’t allow this. You will want to have a ratchet or shims available to make it level on your vehicle. Although there may be a few issues right out of the box, after a few modifications I think it will serve my needs for along time. I’d recommend using one of Sportsman’s Guides sales or discount codes to buy this for under their $240 suggested price and maximize the value. 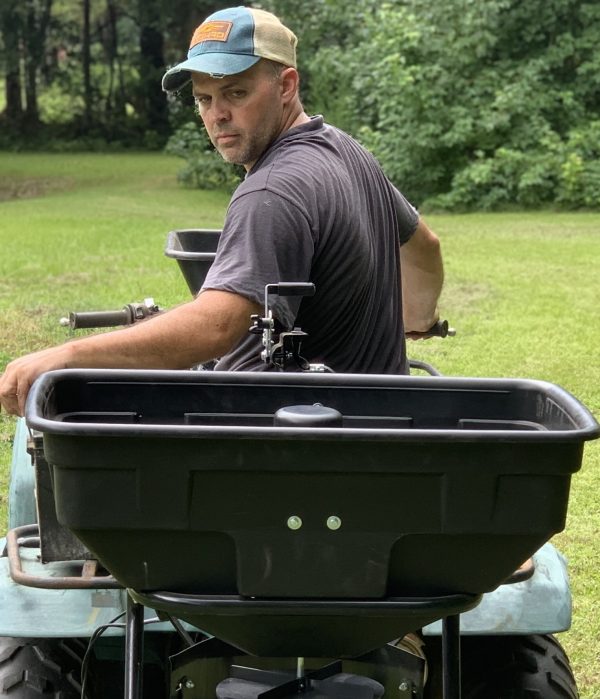 Thanks to Chris Morris for writing this unpaid review and to Sportsman’s Guide for providing a demo unit. Hunting Gear Deals is funded by affiliate commissions. We may receive a small commission when you buy from our partners using the links provided. There is no additional cost to you. Thanks for supporting us by using our links when making your purchases. Chris Morris has been hunting his home state of Alabama for 37+ years. He has killed 3 Pope & Young bucks the past 3 years with his bow in Kansas and 3 bucks over 140″ in Alabama with a gun. That being said, turkey hunting is his passion. Where every bird is a trophy.