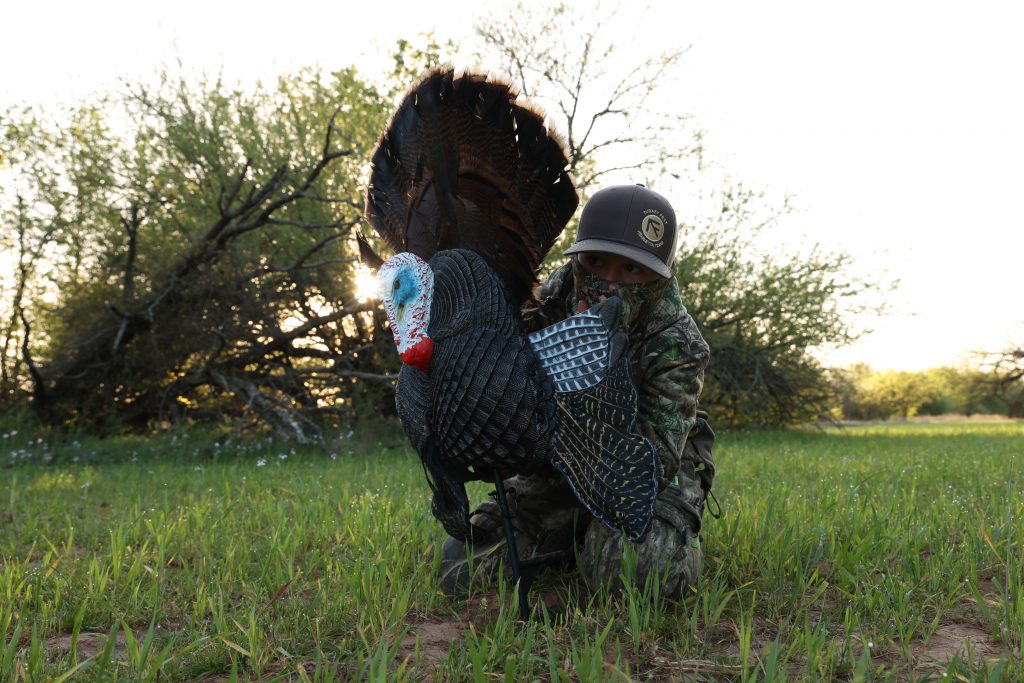 If you’re looking for the best turkey decoy for reaping or fanning, I may have found it!  My friends and I put the MOJO Scoot-N-Shoot decoy to the test on a recent turkey hunting trip to Texas.  With only a few hours to hunt before we had to catch a flight home, the three of us set up in a pinch point that connected two wheat fields and utilized the MOJO Scoot-N-Shoot decoy to lure two long beards into range. 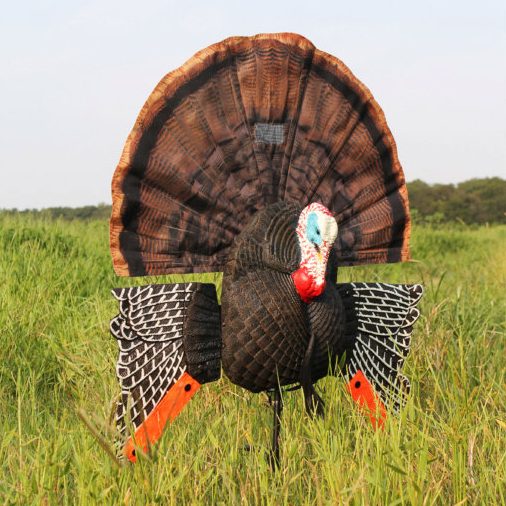 Designed to help you hide your movement crawling through a meadow or through the woods towards turkeys, this user-friendly decoy features a built-in handle and ground stake specially designed for use in spot and stalk or scoot-and-shoot turkey hunting situations. (Turkey Reaping)

What is Turkey Reaping?

Turkey Reaping is an ultra-aggressive form of turkey hunting in which a hunter hides behind a gobbler decoy and sneaks up on a gobbler.  This can be a very effective method to put a hung-up gobbler on the ground but it comes at a RISK!  Do not attempt to “reap” or “fan” a gobbler on public ground or private properties that other hunters might be hunting.  Turkey hunting can be dangerous, especially when you’re pretending to be a turkey and sneaking through a field behind a decoy.  For instance, in my home state of West Virginia, it is legal for hunters to utilize a rifle to hunt turkeys in the spring. 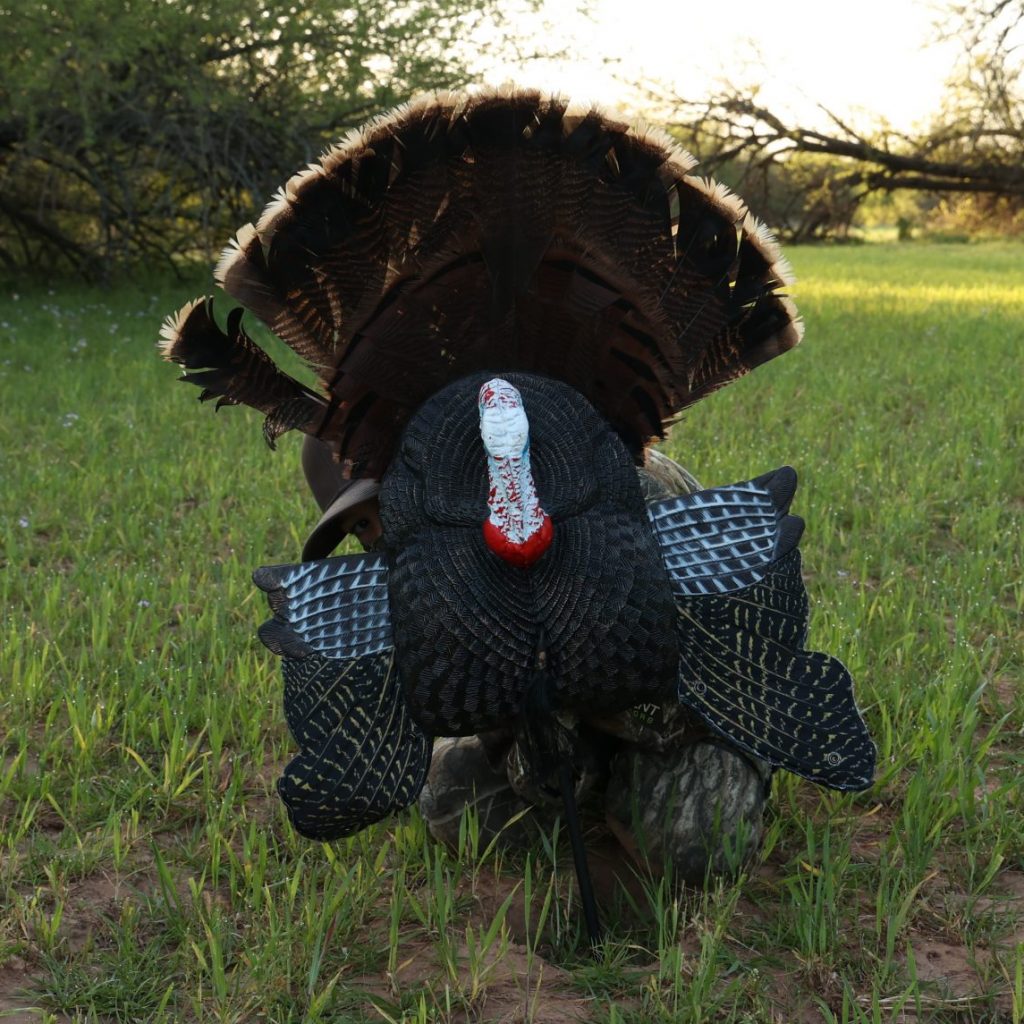 Let’s Talk About the Turkey Hunt in Clay County, Texas

A group of friends and I were invited to participate in the Clay County Turkey Fest, in which one of my teammates, Tyler, killed the heaviest turkey of the competition, weighing in at 23.5 pounds.  Our friends from FST Outdoors took home the grand prize, bringing home the Turkey Fest World Championship after killing two beautiful gobblers.  Click the links to check out their photos!

For years, I’ve heard stories of how aggressive Rio’s can be and how fun they are to hunt.  However, our encounters with Rio’s were slightly different than we expected.   In fact, every turkey that saw a decoy in the first two days of hunting ran away from them.  This left us puzzled.  We had a top-notch turkey caller in our midst, but every time we got on a bird using stationary decoys, they walked the other way.  Everything changed on Saturday when my team utilized a reaper decoy to seal the deal on multiple gobblers.  Had we started out utilizing this ultra-aggressive form of hunting, we could’ve punched our tags much sooner in the competition and put ourselves in a better position to give FST Outdoors a run for their money!

At the closing of the competition, the town of Henrietta, Texas hosted a great banquet, and the awards for the turkey competition were presented, including shiny belt buckles to the World Champion team from FST Outdoors.  This entire event is a fundraiser for the town and several local companies, as well as larger brands like MOJO Outdoors, donated prizes to be auctioned off.   During this time, one of my teammates picked up the MOJO Outdoors Scoot-N-Shoot decoy and we put it to the test the next morning. 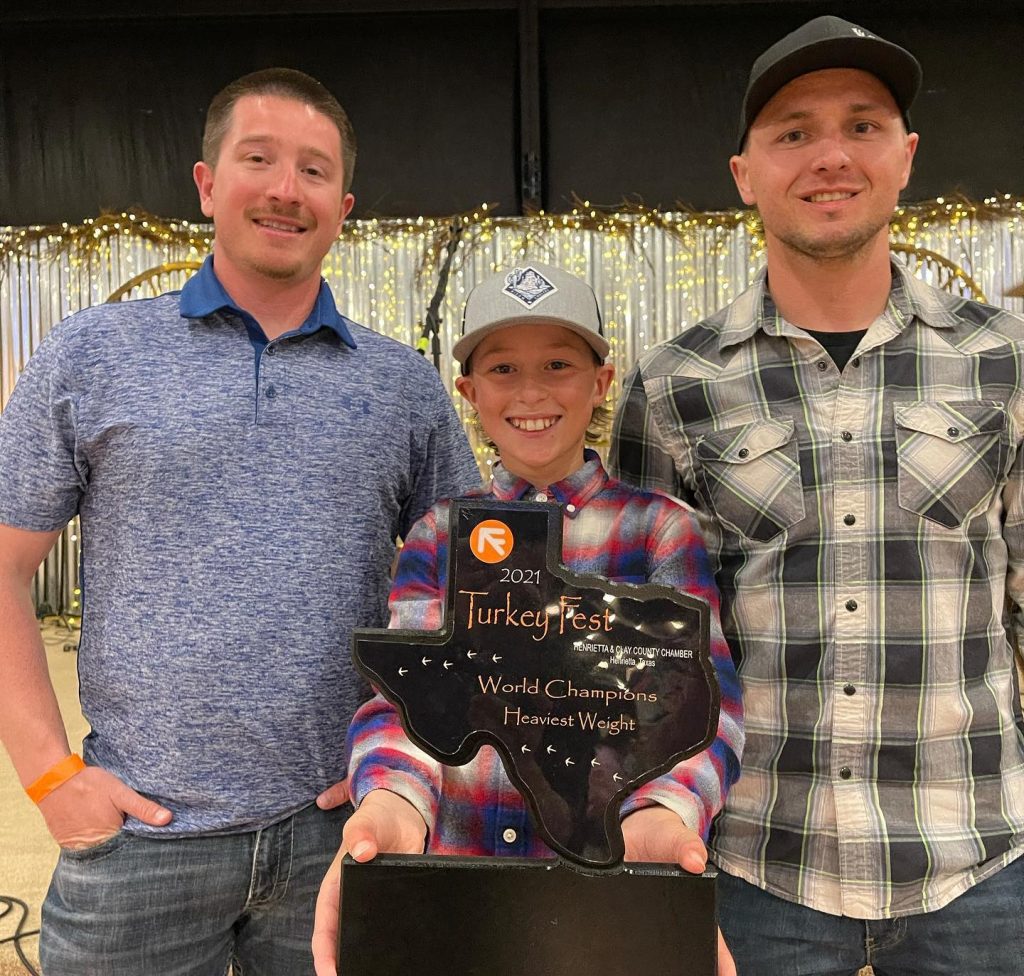 Putting the MOJO Scoot-N-Shoot to the Test

With only a few hours to hunt before we had to catch our flight home, the three of us set up in a pinch point that connected two wheat fields.  This was a new property for us and we managed to sneak into the perfect position that we had previously e-scouted the night before on our OnX Hunt app.  As daylight approached, two Rio’s gobbled in the trees bordering the field, approximately 100 yards away in front of us.  I had my T/C Turkey Gun in hand, Tyler was behind the camera, and Westin from Whitetail Heaven Outfitters was behind the MOJO Scoot-N-Shoot decoy putting on a show.   It didn’t take long and a group of turkeys pitched down into the field.

Westin began to call the group in our direction and he worked his magic from behind the MOJO Scoot-N-Shoot.  With every call, he would sway the decoy back and forth and the gobblers would answer him.  Eventually, they had enough and broke off in our direction where they were greeted with the business end of a Winchester Long Beard XR #5 to the face!  Two birds, one shot, and memories between friends to last a lifetime!

It doesn’t take much to trick a fired-up gobbler into range but the good-looking MOJO Scoot-N-Shoot certainly looks the part, especially when you replace the silk fan that comes with it, with a real one!  Don’t get me wrong, the silk fan looks good, but nothing looks as good as the real thing.  The wings are an excellent touch that adds realism and the wider profile helps hide you as you’re crouched behind it.  The only thing I would change is the ghost-white head.  As colorful as a gobblers head is, the head on this decoy is overwhelmingly white and I might have to give it a fresh coat of paint someday.

Transitioning from a crawling position with a decoy in your left and a shotgun in your right hand can be tricky but the MOJO Scoot-N-Shoot makes it easy.  The sturdy stake is equipped with an offset that allows you to apply extra force with your foot to stick it in the ground.  The last thing you want in this situation is for your decoy to fall over before you’re ready for the shot and this should never be an issue with the MOJO Scoot-N-Shoot. 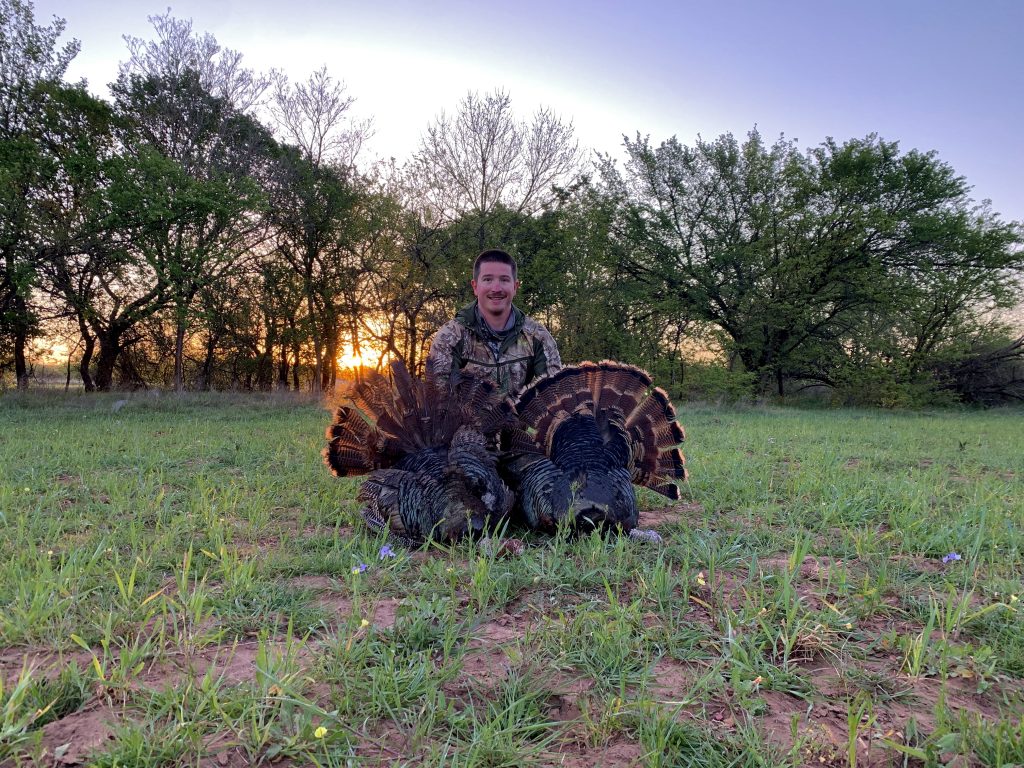 Turkey Reaping can be an exciting way to hunt and there are several options on the market that hunters have used to close the distance on a hung-up gobbler but the MOJO Scoot-N-Shoot Turkey Decoy has earned its place in my turkey hunting arsenal.  It’s easy to carry while closing the distance on a long beard due to its deceivingly lightweight design.  Also, the wings help conceal my body better than installing a fan on the end of the barrel of my gun.  The sturdy, 3 piece stake doubles as a handle, which allows you to keep a firm grasp on the decoy as you make your approach.  Once you’ve closed the distance and you’re ready to set up for the shot, simply push the stake into the ground by hand or by foot, then bust some beaks! 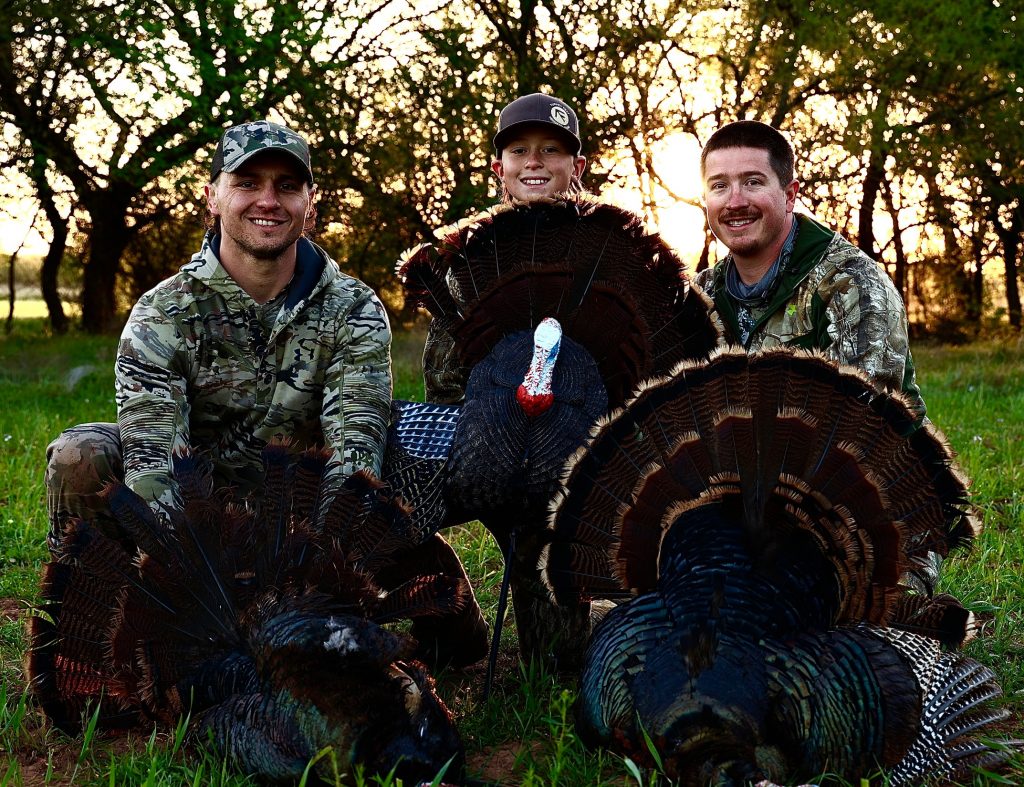 Ready to buy? Bass Pro, Cabela’s, and Walmart are all good bets. Amazon is our top pick with consistently low prices and the fastest shipping.

Thanks to Joey for writing this unpaid gear review. Hunting Gear Deals is funded by affiliate commissions. We may receive a small commission when you buy from our partners using the links provided. There is no additional cost to you. Thanks for supporting us by using our links when making your purchases. Camron is the owner of Hunting Gear Deals.  He is an avid bowhunter with a knack for finding smoking deals on hunting gear. He currently works in the oil & gas industry as an Environmental, Health, and Safety professional.