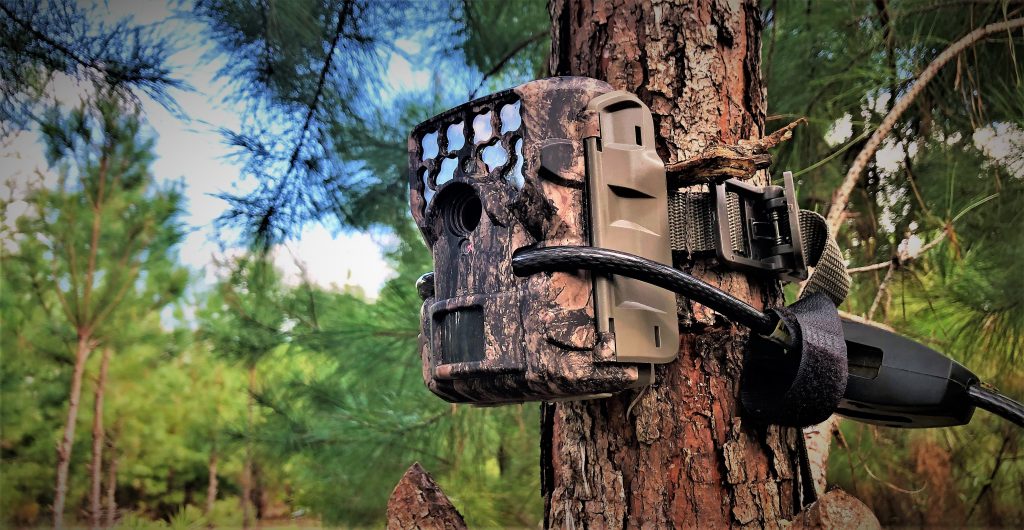 Hunters have experienced some significant changes in equipment and technology over the past 20-30 years. Existing fields such as archery and treestands have been revolutionized, and new advancements in aerial imaging have brought the bird’s eye view literally to our fingertips. During that time, we’ve also seen the rise of the game camera. From the early days of bright flashes and 35mm film to the current trend of invisible IR cell cameras, we’ve not only witnessed the birth of an industry, but we’ve watched it turn in to something that many hunters find they can’t live without. For many, it’s actually become a game in and of itself. 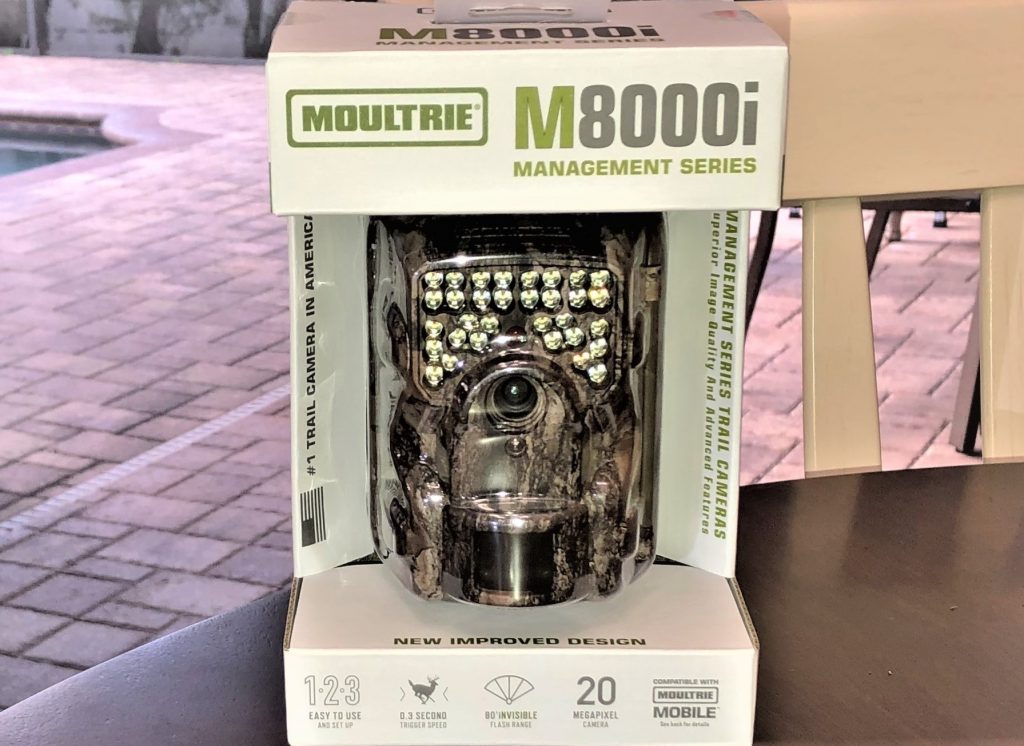 I’ve been running game cameras for over 10 years. I’ve had some great ones and some not so great. Recently, I’ve been running an assortment totaling over 10 cameras, including models ranging from $150 down to the $28 bargain models from Wally World. At the beginning of the 2019 hunting season, I picked up a Moutrie M8000i to see what it could do. First impressions definitely did not disappoint. My very first camera was a Moultrie, and I could immediately tell they had come quite a long way. Hand-sized and just heavy enough that you know it’s well-made, I was already impressed. 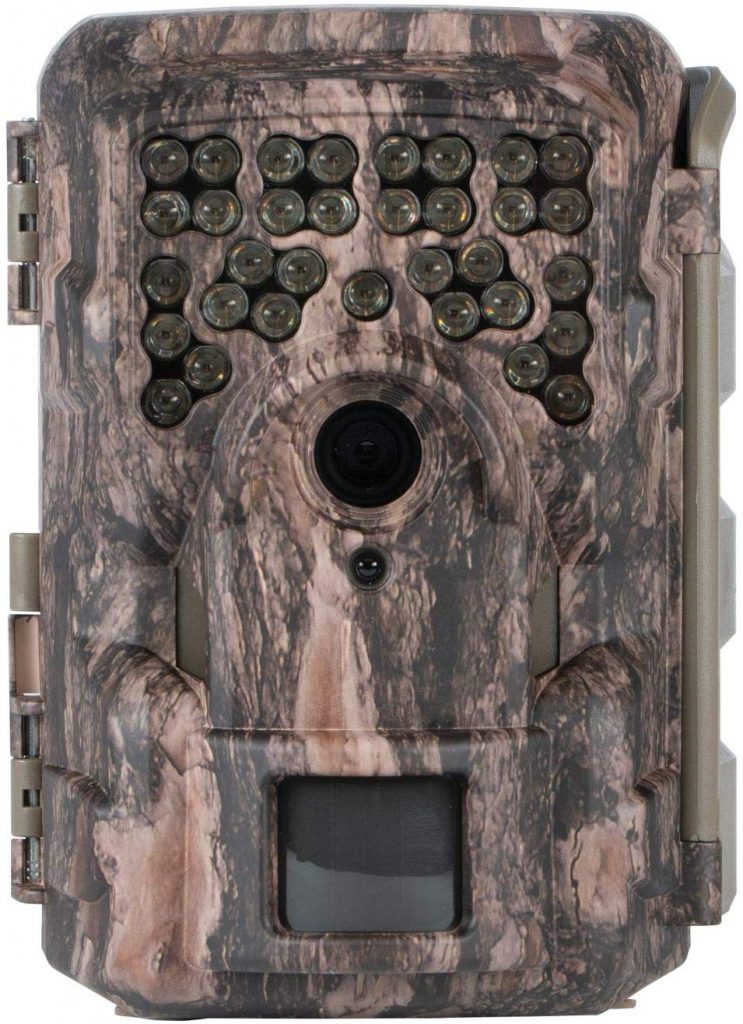 The M8000i is a compact camera loaded with high-end features. It features Moultrie’s ILLUMNI-NIGHT 2 sensor for the brightest and clearest nighttime images. The camera operates on 8 AA batteries for 19,000 pictures. The M8000i is fully compatible with Moultrie Mobile’s MV2 and MA2 cellular field modems.

The M8000i retails around $160, and, at this price point, I expect plenty of features and durability to last several seasons. While I’ve only had the camera for a few months, I feel like the features have provided ample value. It easily outshines my other cameras at the $50-100 levels. Just about every function is customizable to fit whatever need you may have. It will take photos, videos, or both with adjustable quality, timing, and trigger sensitivity for each. However, even with the numerous possible setups, it’s still fairly intuitive. I do recommend that you spend some time testing each function at home before taking it to the woods. This will help familiarize you with each option so you can easily adjust it in the woods for whatever the situation demands. 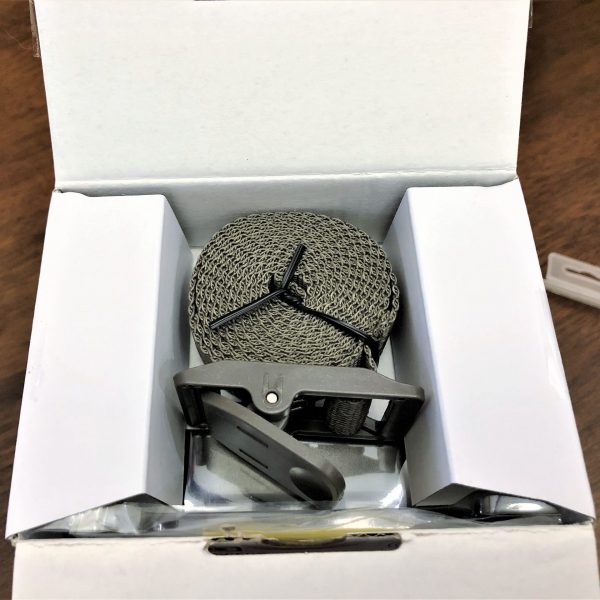 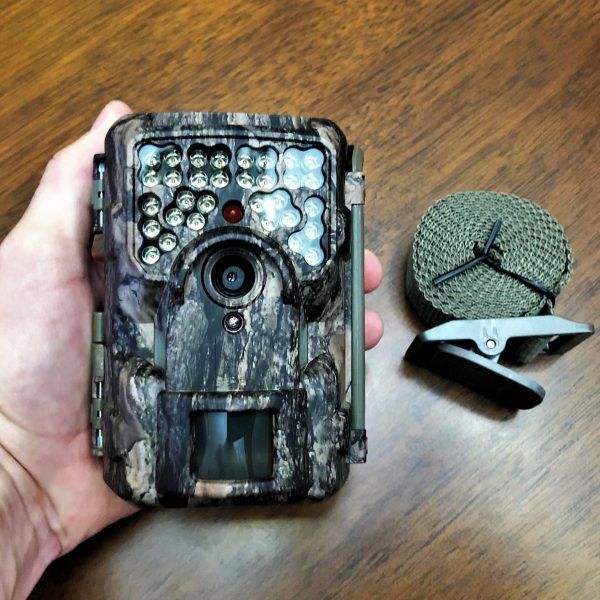 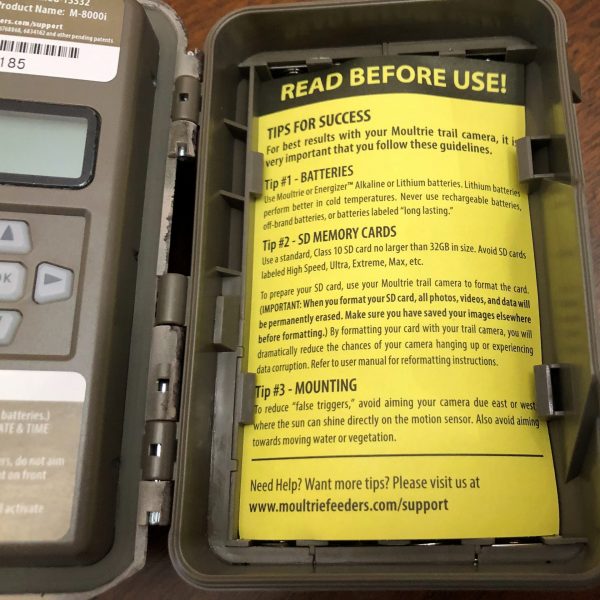 First Impressions of the M8000i

When I got the Moultrie M8000i in the woods, the setup was a breeze. The strap and buckle are both beefy and allow you to get the unit tight to the tree to make sure it holds the correct angle through all kinds of weather. The M8000i also features a slot through the FRONT of the camera through which a python cable can slide to provide insurance against theft. I emphasize the fact that the cable slides through the front because, unfortunately, it’s not a common trait shared by all cams. This feature allows the cable to keep the camera locked, not only to the tree but also closed to secure your SD card and internal components. Since I hunt public land, this is a huge selling point for me. I will not buy a camera that risks having the SD card stolen or corrupted by thieves.

I placed the Moultrie M8000i in a couple of different places where I’ve run other cameras over the past few years. This being the case, I had a familiarity with the number of pictures to be expected at each spot. The M8000i, with its 0.3-second trigger and 80-foot detection range, took just as many game pictures as my other cameras. Even better, the M8000i had far fewer false triggers. The ability to adjust the settings for each area saved me from having to sort through thousands of branch images throughout the season. Pictures were of good quality at the “medium” and “high” settings and were exceptional when using the “enhanced” mode. At 20MP, those pictures will fill up an SD card much more quickly, however. There are also two different flash options to provide some flexibility in picture quality at night. The best quality can be found using the “motion freeze” setting to get crisper images up close, but you can turn this option off (max flash mode) to extend flash-range and increase the brightness of the photos. You may have some blur, however, if the target is moving. 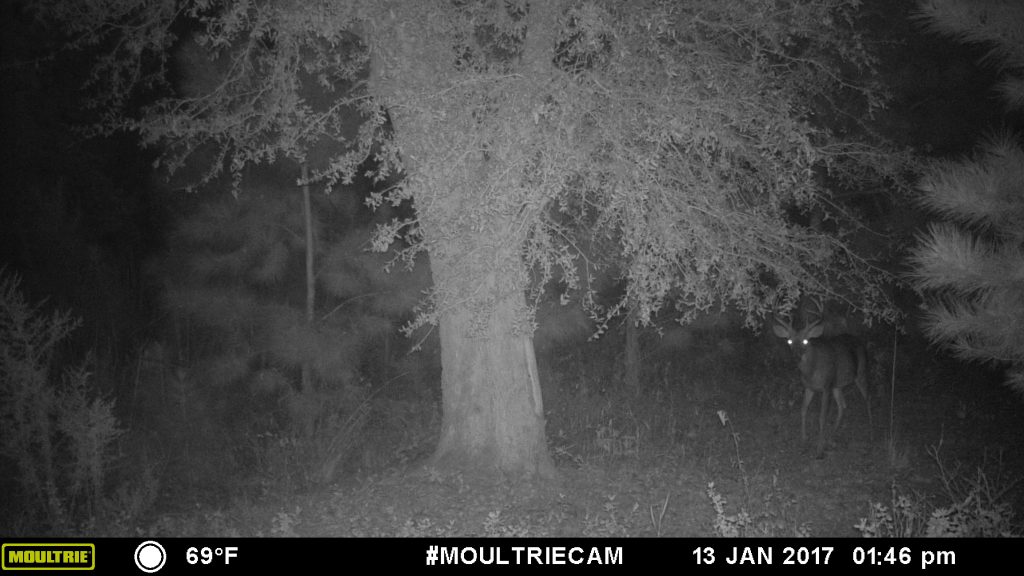 The M8000i also takes excellent videos, but with no sound. It can video during the day and night and gives you the option to record photos and video at the same time. Just be aware that, using this function, it will take a picture first and then start the video. If you find you’re getting videos of half a deer, you can either adjust the sensitivity settings or set the camera only to take videos.

After 3 months and thousands of pictures, the Moultrie M8000i still has 80% battery life with 8 AA batteries. Fortunately, you won’t have to change them often because it was quite tricky trying to get them all in place. Maybe it’s just my unit, but, as you can see from the picture, the batteries like to pop out to the side. If I were in the woods, this would be quite annoying. That being said, you have now read my only complaint with the camera. 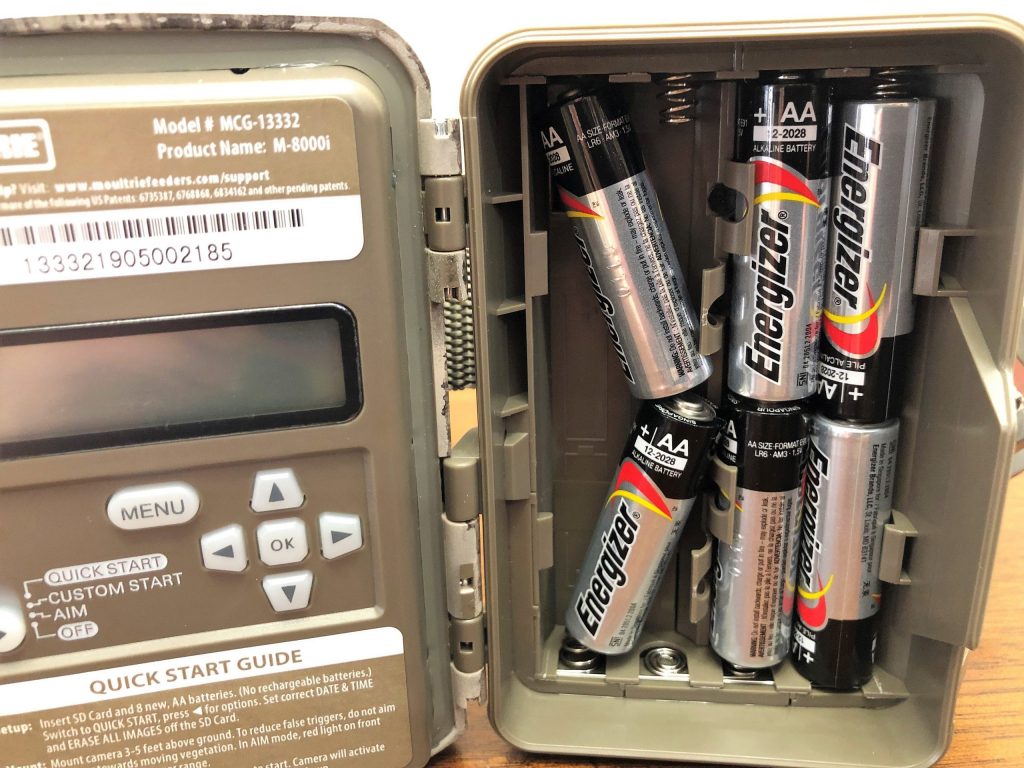 EAfter pulling Moultrie M8000i out of the woods, I decided to give it one final test. Since it boasts an 80-foot flash and detection range, I set it up 80 feet away from the edge of my fence. For each run, I stepped out, waved my arms, and stepped back behind the fence. I did this 5 times. I was exposed for about 3 seconds at a time, and the camera was able to pick me up 3 out of the 5 runs. I am sure if I had extended my exposure time, the camera would have picked me up. However, this test is well outside of what would be considered a typical setup in the woods. What the test shows me is the M8000i can be relied on in just about any location. Flash performance at a distance was also acceptable, provided you don’t have too many objects up closer than your target to cause washout. This is typical of IR cameras and should always be taken into consideration when setting them up.

All-in-all, the Moultrie M8000i is an excellent choice, especially if you need versatility and the ability to customize settings for various setups. It’s also compatible with Moultrie Mobile Cellular Field Modems, which can take an already great unit and send it into overdrive with the ability to get pictures and adjust settings from your phone. Moultrie has done very well with the M8000i.

Ready to buy? The Moultrie M8000i is sold out in many stores, however, you can save a lot over the retail price by getting your trail camera on Amazon.

Thanks to James for writing this unpaid gear review. Hunting Gear Deals is funded by affiliate commissions and to Engel for providing a discounted unit. We may receive a small commission when you buy from our partners using the links provided. There is no additional cost to you. Thanks for supporting us by using our links when making your purchases.