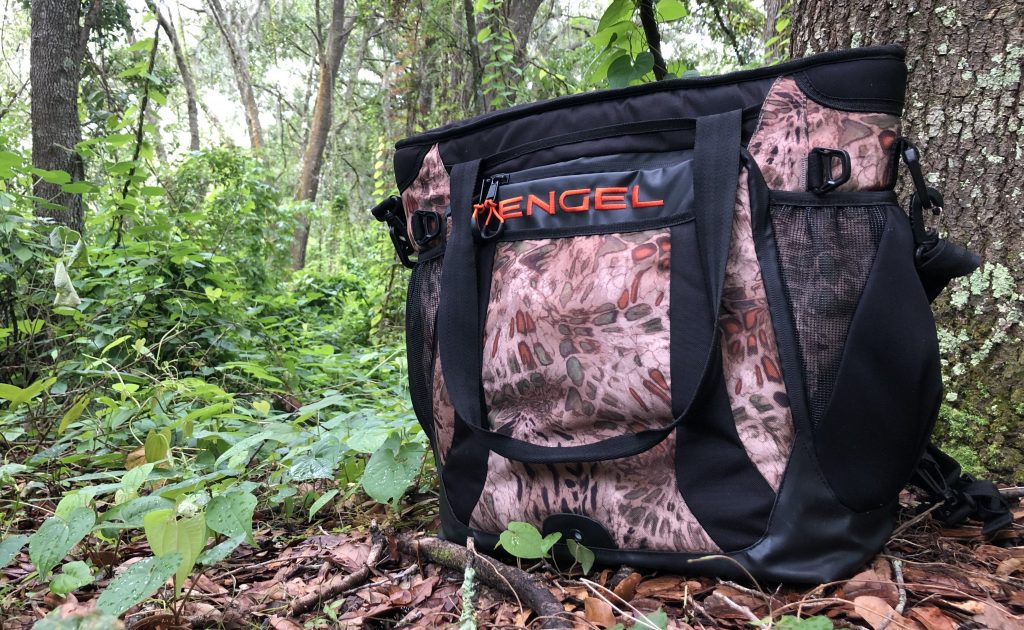 The Need for a New Cooler

If you spend any amount of time outdoors, you understand the need for a quality cooler to keep drinks and food cold throughout the day. As a resident of the great state of FL, who spends quite a bit of time fishing and hunting, I rely on a cooler at least once a week…sometimes more. In fact, if you took a glance in my garage, you’d be hard-pressed not to notice my vast collection of the ice-holding devices, each serving its own purpose. 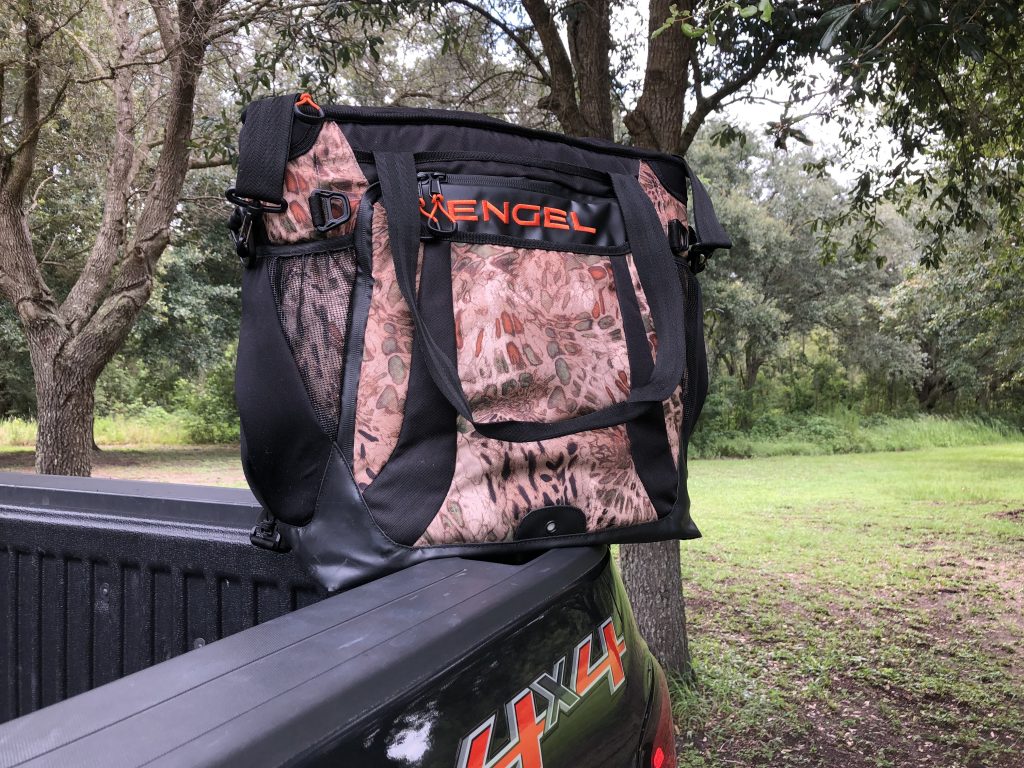 Looking for the “Daily Driver” of Coolers

Despite my collection, one type of cooler I have always been on the lookout for was something better to serve as my “daily driver.” This would be the cooler that I take on every day or weekend trip. It follows me to the woods every weekend in the fall. It rides with me in the boat across the bay and through the inland lakes and rivers. This cooler needs to be able to keep drinks cold for a couple of days, large enough to hold them all, but not so large that I can’t fit it in the front of my truck to give access to drinks while on the road. I had four such coolers in my inventory. They did the job, but as I said, I was always looking for something more.

The new Engel Backpack Cooler features a rugged, tear-resistant 600-denier polyester outer shell with a water and stain resistant TPE coating for easy cleaning. On the inside, there’s a radiant barrier liner of reflective foil, in addition to a 1-inch thick layer of closed-cell foam insulation. Under typical conditions, the Backpack Cooler will hold ice for up to three days.

Could a Soft-Sided Cooler Really be the Best Choice?

I came across Engel Coolers a few months ago. Being a gearhead, I’m always looking through product catalogs to see if anything sparks my interest. As I scrolled through Engel’s offerings that spark came when I saw their backpack coolers. The 23-quart size was just what I was looking for, and the 1” foam insulation promised to provide the needed insulation for even my hottest and most extended excursions. What sealed the deal for me was the fact that a soft cooler seemed like it would fit much better in the truck and on the boat. 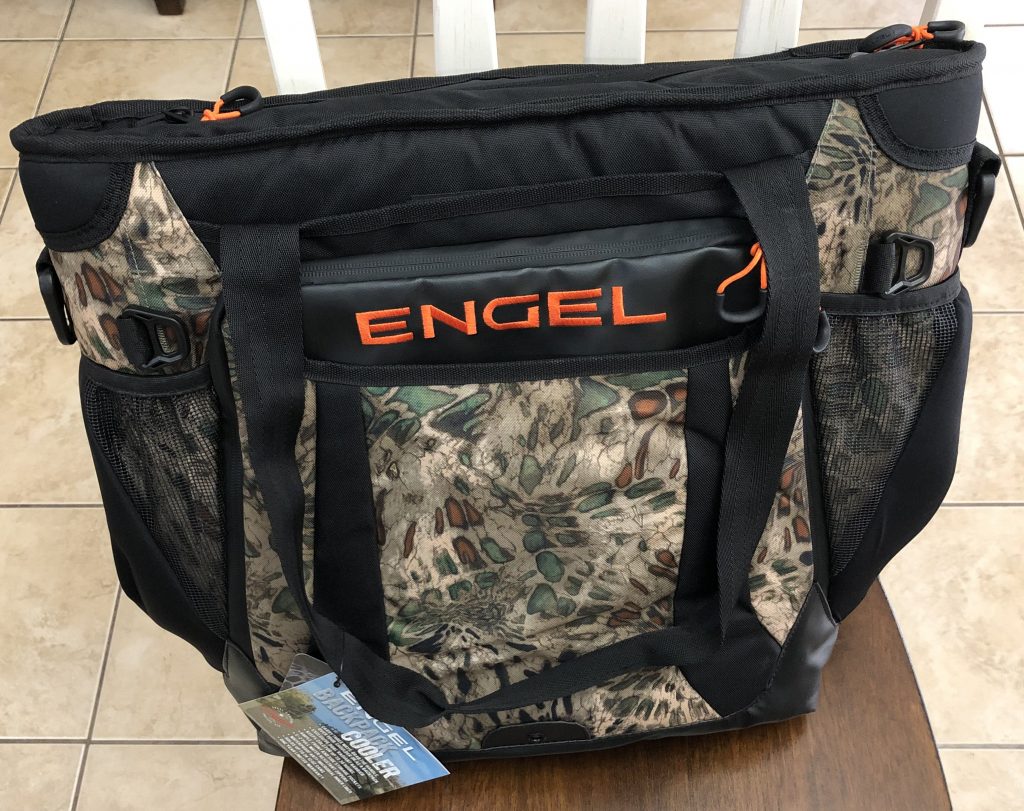 Millions of Pockets, Pockets for Me

When the cooler arrived, I immediately noticed all of the storage options. This thing has pockets on top of pockets…literally. Most of them are open at the top, but there is one zippered pocket to hold more valuable items. In the middle, there are two main compartments. Each one has a zipper to keep it closed. The smaller chamber is meant for dry food items, and can also hold ice packs. The larger chamber will hold your drinks and ice. The cooler inner liner is one-piece construction and made of durable PVC material. 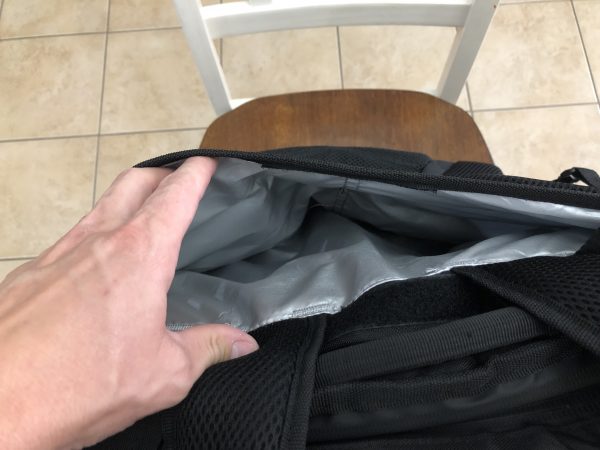 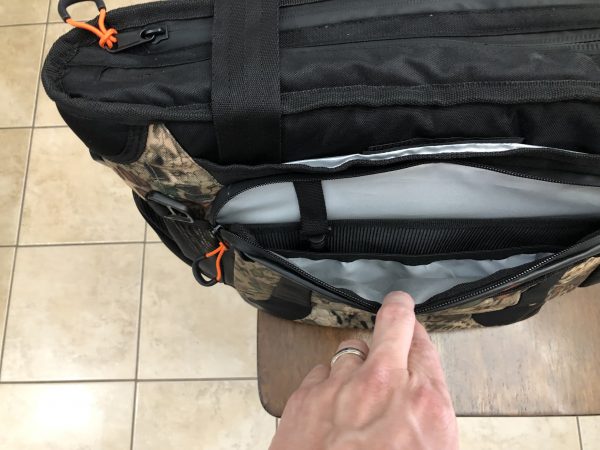 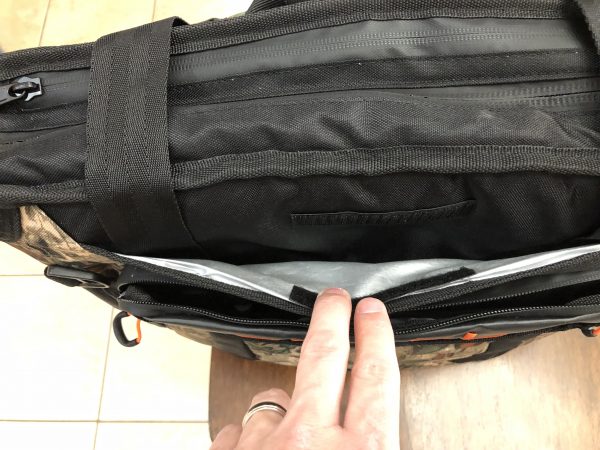 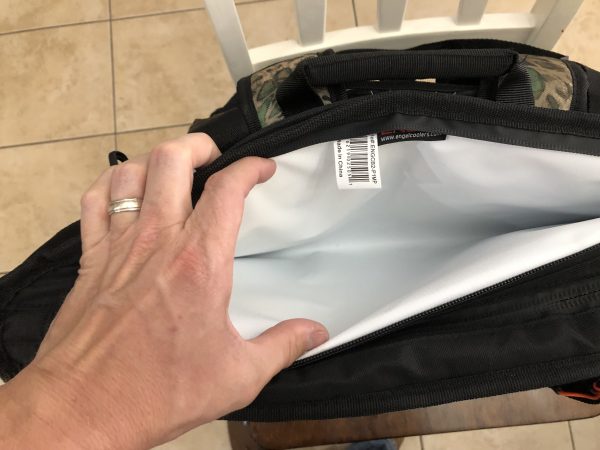 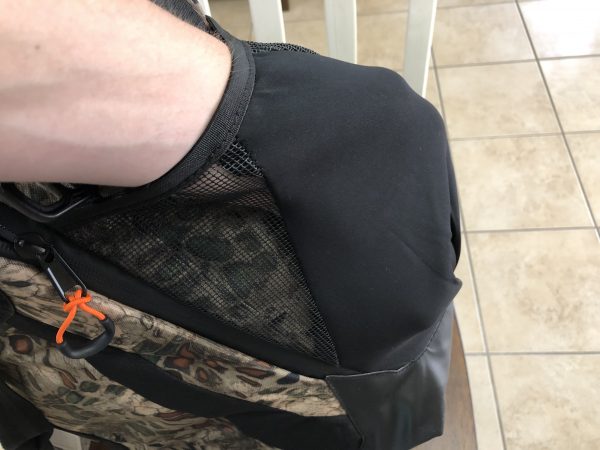 There are myriad carrying options: a grab handle, two hand straps, a shoulder strap, and backpack straps. All four methods are comfortable, and the straps are beefy, making it feel like the cooler could be loaded to the max and stay secure no matter which route you took. The backpack straps, especially, were very comfortable and included a chest buckle to hold the straps together across the chest.

Upon arrival, I also decided to run the cooler through some tests. The first thing I did was dunk it in my pool to see how the water-resistant properties of the outer shell were. Water was not able to get through the shell, but it did seep in through the seams of all pockets except for the main internal compartments. Engel lists the outer shell as “water-resistant,” so my test was a bit extreme. I wouldn’t have a problem, however, relying on it to keep something like my phone safe from rain if I used the zipper pocket.
The next test was to fill the main compartment with water. I wanted to see how well it would keep icy water inside just in case it fell over in the truck or boat. Unfortunately, water seeped rather quickly out of the zipper, but this isn’t a huge problem. Every hard cooler I own would completely dump its contents should the same test be applied. Furthermore, the way the cooler holds weight it would be challenging to knock it over in a manner where this would be a concern.
Finally, I wanted to see how well it would hold ice. I decided to put it up against another cooler of a similar size that I had been using as my go-to cooler. Each was filled with 10 pounds of ice and sat outside next to each other for 48 hours. The Engel was the clear winner with 5 pounds of solid ice still left inside. My cheap Igloo cooler was left with mostly water and less than a pound of ice. I need my Backpack Cooler to be able to keep drinks and food cold for an entire weekend, and the results of this test show the Engel will do just that. 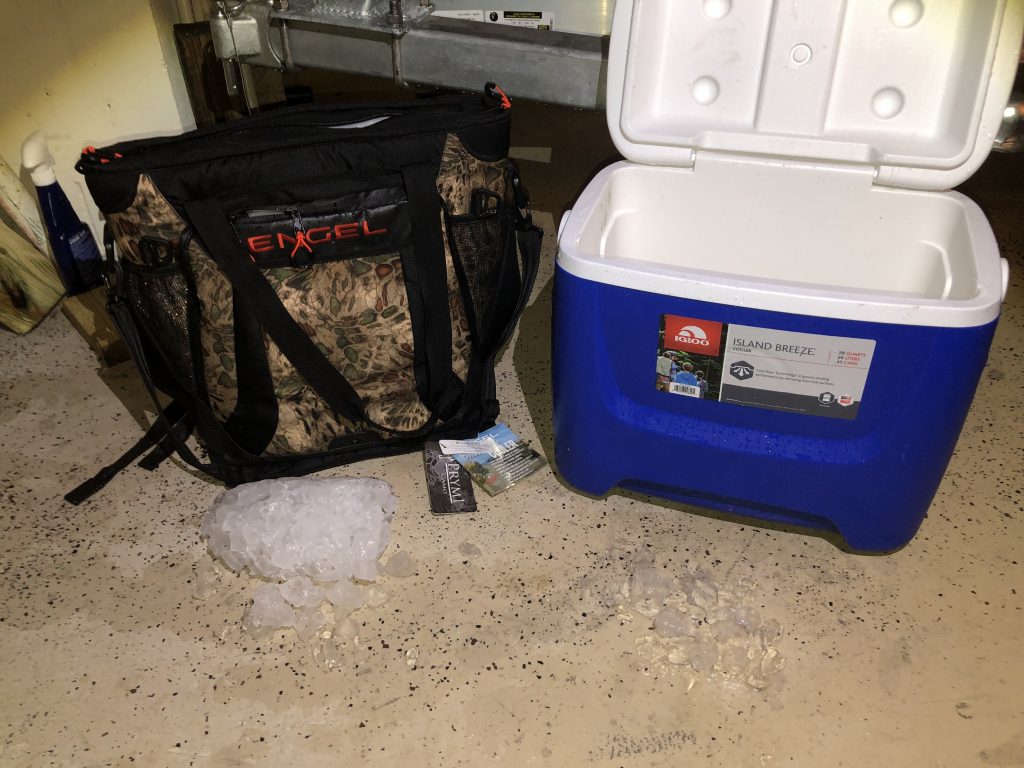 Since these initial tests, I’ve used the Engel on at least a weekly basis for the past 3 months. I was hoping that I’d be able to throw this cooler in the boat and the truck without having to worry about it falling over and dumping out all over the place, that it would fit comfortably in my truck and stay out of the way while walking around my boat during fishing trips. I was hoping that it would hold ice well and keep everything cold during these hot summer days. So far the Engel Backpack Cooler has met all of these expectations. I can say for certain that had I been using one of my other coolers on the boat it would’ve gotten knocked over at some point and created a massive mess on board. The Engel has bounced all over the bay and had no problems. I wish I would’ve considered a soft cooler earlier. 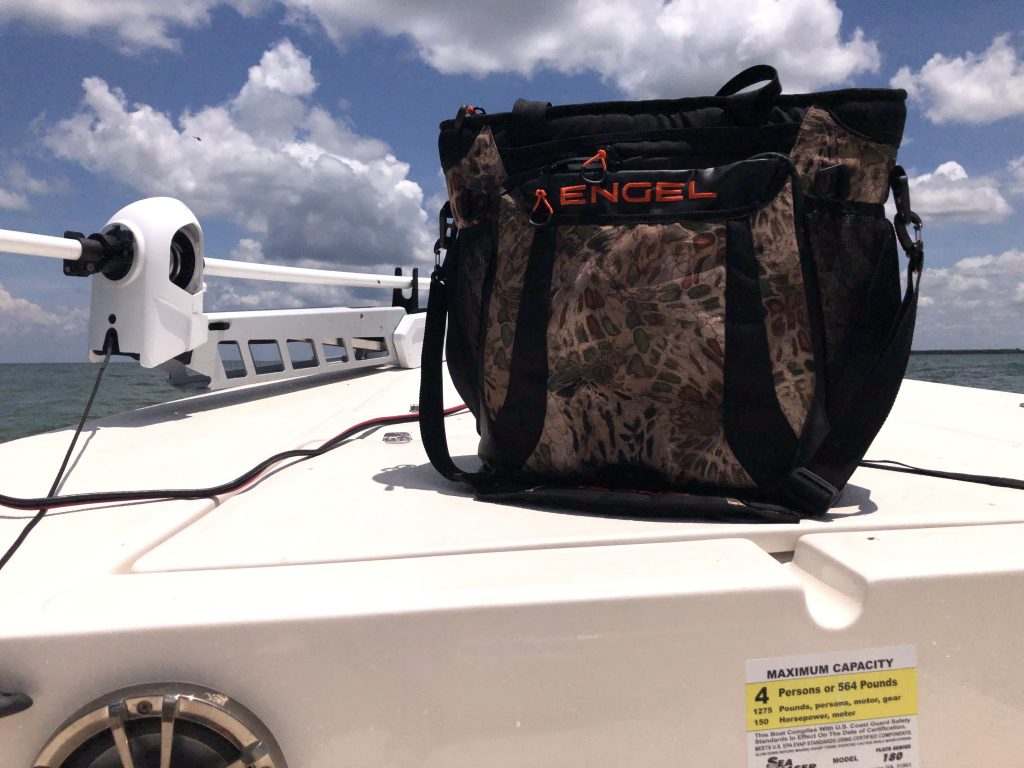 Engel offers the cooler on their website for $129.99, which is on the lower end of other similarly built backpack coolers. If you shop around, you can find it for less, depending on the color option you desire. For me, this cooler has replaced others which I paid about $20 for. This is a significant price difference, BUT there is a considerable performance difference as well. My other coolers do not hold ice as long, and I can’t toss them around the same way. This cooler provides the user with so many more options, and the comfort factor of a soft cooler makes a more significant difference than I realized it would. The bottom line is the Engle Backpack Cooler is far superior to any hard cooler of the same size. I will no longer be searching for a “daily driver” cooler. The Engel will be riding shotgun with me from now on.Engel

Ready to buy? You can get the Engel Backpack Cooler directly on the Engel website. Pricing on Amazon is hit or miss, but it’s worth checking.

Thanks to James for writing this unpaid gear review. Hunting Gear Deals is funded by affiliate commissions and to Engel for providing a discounted unit. We may receive a small commission when you buy from our partners using the links provided. There is no additional cost to you. Thanks for supporting us by using our links when making your purchases.